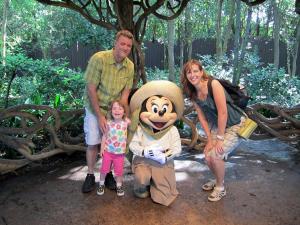 Our Summer vacation for 2012 was a Disney Dream Caribbean Cruise along with a few days spent at various sites in Florida.

We started off in the Orlando area, home of multiple Disney Theme Parks as well as other attractions. It wasn't much trouble getting there, Southwest Airlines is rather painless (at least compared to United) and Fianna probably has more air miles than the average adult by now. The biggest concern was whether she'd get car sick in the rental... and she did... many times during the week (only a phase I hope). We stayed at a Hilton Grand Vacations in Orlando. I mention it because it was exceptional. Seems that every room in the place is a suite with its own kitchen and laundry. Nice digs for the price. We spent some good times by the pool too.

For most of the trip we were in the company of the Baers (Robb, Melinda, Jack, Amanda) and, sometimes, Robb's folks Pam & Steve. It's the fifth vacation I've taken with Robb & Melinda (Italy twice, China, Yosemite/Safari West, and this trip). It's the third vacation Fianna has taken with Jack & Amanda who she calls "My Guys". Do kids take vacations?

On Day One we headed out to The Magic Kingdom, Florida's version of California's Disneyland. A pretty good facsimile, but I still prefer CA's (and I've heard ours has gotten much better since the last time I was there). This was the first time I'd gotten to use Disney's Fastpass system for boarding rides. What a lifesaver! It was somewhere near 100 degress and over 80% humidity. Waiting 30 minutes in every line, with a three year old, would have been unbearable. With FastPass you could grab one for the popular rides and then take two less popular ones while waiting. Perfect.

On Day Two we split off for Disney's Animal Kingdom while the Baers went to Epcot. DAK is split into three main areas (Africa, Asia and Dinoland) and four smaller ones including a central hub that includes the huge Tree of Life as the center of the park. As a wild animal park, DAK may not compete with San Diego's or others but those can't compete with Disney's ability to uniquely theme the park areas (the Asia section was especially well done as a Nepalese village), provide good rides and stageshows, as well as thrills for the kiddos. At various specific places within the park were locations for Fianna to meet Disney Characters with little to no lines. There was also a petting zoo. 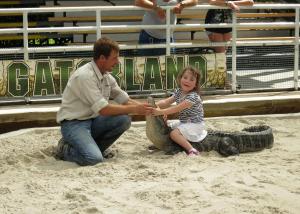 On Day Three we all went to Gatorland. After two days of crowds and long lines, this was a great break, and interesting. Gatorland's full of... gators... 100s of gators... and turtles, birds, snakes and other stuff. It's just a little park with a good attitude and a laid-back approach. We also got out in time to stop for lunch where the hamburgers weren't nine bucks a piece.

On Day Four we were off to Cape Canaveral to board the Disney Dream for a 4:30pm departure. What a ship! I'm not a cruise ship afficionado, but the Disney Dream is a beautiful machine that put to shame any other vessels I saw during the trip.

That said, it would be very tough to come up with a more ideal vacation than a Disney Cruise when you've kids in the under 10 y.o. demographic and/or it's a family vacation for mixed generations (kids, parents, grandparents). Disney Cruises have done a great job of providing quality & safe entertainment for the kiddos, and doing it in such a way that the adults have ample opportunity to... get away from their kids (no offense Fianna). 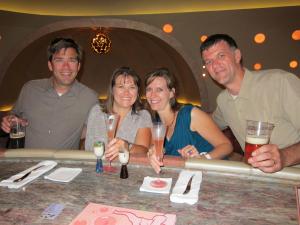 The meals, especially dinner, were first class. While we typically ate buffet style for breakfast & lunch, dinner was a slightly more formal affair in one of three beautiful restaurants with multiple courses of gourmet choices. The service was exceptional in all areas of the ship, particularly the room service. Most importantly, the alcohol was not horribly overpriced.

We spent one day at sea, although, as far as I know we just ran in circles through the Bahamas islands. It was pleasant.

We stopped for one day in Nassau. This is where we scheduled ourselves to go on a 'Dolphin Encounter'. We spent about 30-minutes lining up to get on a 20-minute boat ride to a 10-minute presentation allowing us to get into the water for 5-minutes with a trained dolphin, wait 10-minutes to buy a video of the experience, wait 20-minutes for a boat back to Nassau, a 20-minutes boat ride back, and another 30 minutes to get back on the boat. It was a worthwhile experience, especially for Fianna, but next time I'd like to see Nassau. It seemed like a very interesting city... from our room's balcony.

We stopped on two separate days at Castaway Cay, Disney's private island in the Bahamas. Castaway Cay is a pretty sweet set-up. Nobody there but people on the cruise. Its clean white sands and crystal clear waters are comforting. There's plenty of bars and an adult beach. There's even private cabanas you can rent. It was a lot of fun to watch Fianna take it all in and spend some quality time in the water with 'her guys'. I enjoyed the last day there in particular: watching the three kids build sandcastles, watching a flock of birds vicously attack somebody's lunch (sorry... but it was awesome), almost stepping on a stingray, seeing the Klumps in person, standing in the ocean drinking with Robb, and to top it off, probably the best lightning storm I'd ever seen (watched it from my balcony while smoking a cigar and drinking Espolon tequila.. a tough gig but someone has to do it). 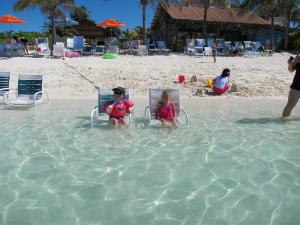 On our return to Cape Canaveral, we all stopped at the Kennedy Space Center, home of NASA. This was a good stop, but I was suprised at the price. It was something like $40+ to get in... kind of suprising for a place built with taxpayer money. I'd think it a government public relations/educational activity, not a profit center. Anyhow, it was great to see the place where so many historical Apollo and Shuttle missions started off (as well as the earlier Gemini Missions).  Makes one nostalgic for days when America could get the job done. *sigh*

In the evening, the Bresslers went to Downtown Disney (a huge outdoor mall & entertainment area near the parks), had dinner at the Rainforest Cafe, and shopped at the 50,000 sq. ft. World of Disney. A fine way to top off a terrific vacation.

The next day, an uneventful flight back to Sacramento.

Check out all our Disney Vacation 2012 photos.... or a video of us playing with Dolphins.