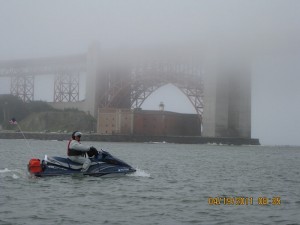 In April, my Dad (Rick Maybe-Bressler) and Uncle (Allen Maybe) did something that nobody one else has done. They navigated personal water craft (perhaps better known as "Jet Skis") from the Pacific Ocean to the source of the Sacramento River. They started by passing under the Golden Gate bridge, then navigating the San Francisco Bay, San Pablo Bay, Suisun Bay, and the Sacramento Delta region. They passed through the cities of Sacramento, Chico, and Redding, while continuing north to the source of the Sacramento River (somewhere past Lake Shasta). In all, a trip running four days and a little over 400 miles, some of it across pretty rough and debris-prone waters (at least for a Jet Ski).

Neither of the two are strangers to this sort of modern day exploring. In addition to other notable accomplishments on a PWC, Allen Maybe has traveled the entire Santa Fe Trail and Oregon Trail on horseback (one of only a handful of people living to have done so). Rick Bressler has traveled the Santa Fe Trail on horseback, done extensive 'Jet Ski' exploring of Sacramento River tributaries, and hitchhiked across country.

They didn't make too big of a deal out of it. There were a couple receptions with folks who provided the gear and such, but I couldn't even talk  Rick into sending out a press release beforehand. There was extensive preparation work though, as they talked with most of the law enforcement agencies on the way. San Francisco, in particular, is very sensitive to bearded guys on jet skis riding under the Golden Gate.

Oh, by the way, I forgot to mention that they are both over 65 years old. I thought that was a pretty big deal. I sure hope that when I'm 65 I'll be physically able to ride a Jet Ski for four days straight. To be perfectly honest I'm not so sure I could do it now and I still have 20 years to go.