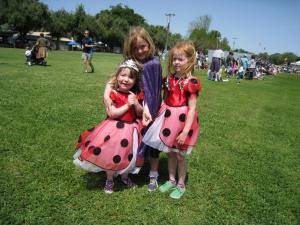 The Sacramento Valley Scottish Games & Festival are  one of our biggest 'family' events of the year. Jennifer and I have been going every year for probably over a decade. Fianna has been to each one since she was born. Over the last half-dozen years or so, we've teamed up with the Wilsons and their kids (who we consider extended family), wandering around as 1-3 groups of managed chaos (me watching over a couple of the Wilson kids, the Wilson girls managing Fianna, everyone together for the Wicked Tinkers, or some other combination). Over the last couple years, the Grandparent Bresslers have been coming too.

The Games stretch over two days and include many other activities besides Athletic contests. If you are interested in Celtic culture at all you would be hard pressed to see everything you wanted to see in one day: 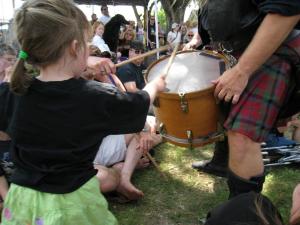 The last few years we have been going on both days. It's like a weekend away without having to rent a room. The big event for us is seeing the Wicked Tinkers, a musical group that has been there every year that we have, except one (when they were playing at Carnegie Hall). They are high energy and very good at getting the crowd involved, especially kids. Since birth, Fianna has seen almost every single Wicked Tinkers set (3-4 a day?) at the Woodland Games. Last year, the drummer offered her the drumsticks at three different performances and she was too shy to take them each time. I told the drummer this and he made sure to visit her this year... and she actually took the sticks.  Also, Liam Wilson ended up in a network television interview during the games.

If you live in the Sacramento Area and want to have some fun, you should not be missing the Sacramento Valley Scottish Games & Festival, possibly the premier cultural event in the region.

More pictures here and below is some video of the girls dancing to Molly's Revenge and the tail end of a Wicked Tinker's song: