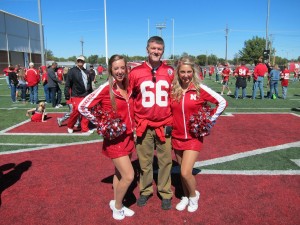 In September 2012, I flew into Nebraska to drive around with Rick and Laurie Bressler. They had already been driving cross country for a couple weeks and I wanted to join them for a Cornhusker game, visiting relatives, and old family sites.

During their trip planning I had noted that there was a Cornhuskers home game the week they would be in Nebraska. Since I had an Uncle who used to be on the Cornhusker coaching staff (John Melton who passed away last year), we were able to get tickets easily (Cornhusker Football has sold out every home game since Nov. 1962). I flew in, we headed down to pick up the tickets and then on to Lincoln and the game. Had an awesome time at the game (of course). Big Red won handily and we were able to visit with my Cousin Randy who works emergency services during the Home Games.

After the game, we were on to Omaha for Rick's School Reunion (50 year). It was my first chance to see more than the airport here. For the most part, I walked around the old downtown and we drove the highways a bit. Omaha is looking good these days, beating down things I've heard said about it in the past. Had a good time.

After Nebraska City we were up to Burbank, South Dakota to visit with Cousin Rick and spend some time along the Missouri River (and at Whimp's Place). We also spent a couple days using his place as a base to explore the small towns of NW Nebraska. In particular, we stopped at Coleridge to visit the old Farmstead and graveyard where we paid respects to departed Bresslers and Pecks, and Wayne to visit Grandma/Grandpa Bressler's old neighborhood, the Bressler Park and Rick's old stomping grounds (school, etc).

Finally, before going to the Omaha airport and heading home... a visit to Husker Hounds to stock up on Husker gear.