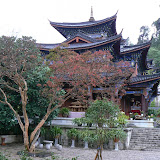 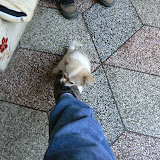 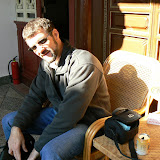 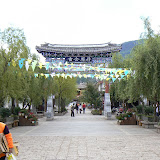 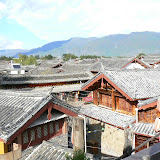 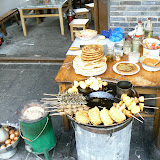 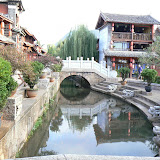 Here is part two (or day 2) of my recent trip to China, which begins the portion of the trip where I stayed in Lijiang. I was going to include the entire time spent in Lijiang in one post, but it ran on too damn long. :p So... you're going to get a post for each day.

On Saturday (Oct. 7), we arrived in Lijiang. First thing we needed to do was meet Ivy in the square that serves as transition between Ancient Lijiang and New Lijiang, and then find a place to stay. Ivy was in Lijiang by coincidence to help out her brother, who did live there. Finding lodging was real high on my list as I was carting around 50 pounds of luggage and automobiles are not allowed in Old Town Lijiang. For some reason I had a difficult time relaying the sentiment that I really didn't want to spend a lot of time dragging all my junk across rough cobblestone streets crowded by dense pedestrian traffic.

I had recommended some places before getting to Lijiang, but not 'shopping around' is contrary to the Chinese way. Ivy and brother were quickly involved with this project, and I dutifully followed behind with my gear even though I was strictly an accessory (everything going on was going on in Chinese). After 15 minutes or so of trudging about, I had enough, parked myself at a nice spot, and asked them to let me know when they found something.

Eventually, they returned to escort me to a traditional residence that was converted to an inn/hostel, as many places in Lijiang have been. Nobody there spoke English, but I found that a private room, with private bath, would run 100 Yuan a night (about $13). I said what I would have said to any room at that point, "PERFECT". I think that’s part of the Chinese negotiating strategy, just wear you out until you agree with whatever. Either way, my luggage was definitely spending the night. Wei's room was more on the hostel side of things, four beds in one room and access to a shared shower. I think hers was 25 Yuan (about $3.50) a night. She ended up getting the room to herself.

The inn turned out fine with some minor inconveniences. To get hot water in the morning, you had to wake someone up (who didn’t speak English) to turn it on. To leave in the morning, you had to wake someone up, mainly because the little dog in the courtyard would go bat-shit and start barking when anyone set foot outside their room. The bed was hard as rock, but this is fairly common even in some good hotels here... traditional Chinese beds are hard. The bathroom was one of those shared things where you took a shower and the whole place got soaked, and its roof was about a foot too low for this foreign devil.

On the bright side... it was quiet, it was charming, the air was fresh, and there was a chair outside the room where I could sit, smoke a cigar, and see green hillsides. Also, the two 20ish girls that staffed the place 24x7 were absolutely beautiful! Unfortunately, I don't think either of them believed in the power of hot showers or clean clothes. Between the two of them I think there may have been one shower in four days, one never changed her clothes the whole time I was there. On day three she walked by me and I think my eyes watered. Still, from 20-30 feet away, up on my patio, HAWT.

For the price… perfect.

After settling in, it was afternoon. In the interest of time we grabbed a driver to get us to the ancient town of ShuHe. There are a couple villages near Lijiang that are roughly as old, but don’t attract the same degree of tourist interest. ShuHe is one of these villages. The villages are also within bike riding distance and the ride there is probably just as interesting (if not more so) than the villages themselves.

ShuHe is surrounded by green hills, is a very charming and relatively quiet place. I would guess that old town ShuHe is as large as old town Lijiang but has only 10% of the tourists, and, as far as I could tell, there is no “New ShuHe” surrounding the ancient town. If you are a late riser and the crowds of Lijiang get you down, stay and relax at ShuHe. There are plenty of small Inns there.

We trotted around ShuHe for a bit checking out some of the shops, watched the natives race horses down the street, sampled some street food, and stopped at a restaurant for a snack and beer.

In addition to the cheap rooms that can be had in Lijiang and ShuHe, there is inexpensive street food to sate your appetite. I lived off this stuff in Yunnan. You can readily find a sort of potato pancake, cooked whole sweet potatoes, fresh and/or dried corn on the cob, pork buns, a multitude of meat products served kabob-style, and spices to apply to all of the above. In Lijiang, I frequented an old guy who sold pork buns first thing in the morning. About two of these, slathered with chopped jalapeno, could make a breakfast. Price for one… half a Yuan (7 cents).

In the evening, we went back to Lijiang and strolled around the old town at night.... ancient Chinese style buildings and streets giving off a yellowish glow courtesy of abundant red paper lanterns and the small open-air shops. In Lijiang there is a bar street (Xinghau Street) where a river separates two sides of the avenue. In the evening, customers and staff play singing games while others float candles down the river. The singing echoes throughout the area.

Another reminder of the hospitality of the Chinese.. Ivy’s brother was in constant contact with us throughout the Lijiang portion of the trip (usually by cell phone). He was involved with finding our rooms, finding us a ridiculously cheap driver for our day trips, advising us on what to do and loaning Wei a heavy jacket. This was a fellow who only days earlier was wrongfully evicted from his wood-working shop. He didn’t know me at all and never met Wei as far as I know… but… he was the brother of Wei’s best friend, and I was Wei’s friend. This made us part of his circle and he made it his ‘duty’ to take care of us, even to the extent that he’d show up bright and early in the morning to make sure we got off with our driver in good shape.