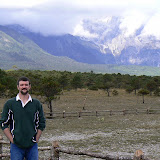 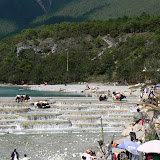 On the way to Yulong Mtn 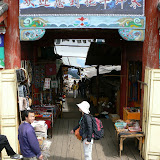 Vendors at base of Yulong Mtn 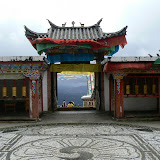 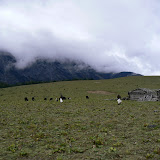 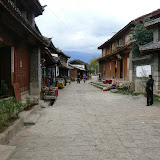 Here is part three (or day 3) of my recent trip to China, which is the second day in Lijiang.

The next morning I met with our guide and driver (two people) and left for a day trip to Jade Dragon Snow Mountain (or Yulong Mountain). Yulong Mountain adds to the mystique of Lijiang as it dominates the scenery of the area. On a clear day, its presence only nine miles away can’t be ignored. Being so close, it is the principle source of the sparkling clear water which sustains the area and runs through the channels seen in most old town streets. It also features the southernmost glacier in the Northern Hemisphere and 13 peaks, among which Shanzidou is the highest one with an altitude of 5,600 meters (18,360 feet).

The scenery on the way up twisty mountain roads to Yulong was beautiful and only slightly distracted from by the stiff suspension and squeaky rear end of our transportation. I don’t know how most the vehicles around here stay together. You see these low-powered vans, with 12 or 13 inch wheels, bouncing around poorly maintained roads all over the place. They get you there... and I guess getting there is the point.

One stop on the way to Yulong reminded me of my ‘manufactured tourist attraction’ comment from Kunming. There was a clear-water river running down the base of the Yulong across a perfectly tiered series of waterfalls. It was a beautiful scene, but the waterfalls were clearly fake!! Why bother? I believe the water was genuinely the hue you see in my pictures, this happens in a few places in China and this area is historically reputed to have one river that runs white and another that runs black (the black one runs over coal veins), but the waterfalls... as fake as Trump’s hair.

After about an hour and a half to two hours of bump and grind roads, we made it to the cable car that would take us up to roughly 3700 meters (15,000 feet??). We travelled a little extra by car to get to a more remote location. Yulong Mountain is one of the most popular attractions in the area and apparently the first cable car route you can get to is clogged with tourists. This turned out to be a very good plan (thanks to Ivy's brother) as the second route was virtually vacant. Once at the top their was a fairly well maintained loop trail out to the mountain and back. It was slow going in some parts as 15,000 feet is no stroll in the park... pretty thin oxygen up yonder. There were frequent stops to catch my breath but overall my year of losing weight and working my ass off to get in shape paid off.

Of course… don’t put it past the Chinese to try to make an honest dollar at 15,000 feet!!! No tourist stop is complete without the requisite vendors. First thing we had to walk through on arrival was a gauntlet of Tibetan merchants and their permanent vendor stalls. You can’t go anywhere in China without someone trying to sell you something.

Beyond the merchants there was a Buddhist Temple and some prime grazing land with a Yak every fifty feet or so. Each of the yaks had a tiny little bell (not a big cowbell) around their neck and at 15,000 feet all you could hear was the wind, and a hundred little bells.

Once into “Yak Country”, I left the trail for a bit. Technically, this was forbidden, at least according to the signs that were posted all over. Once out of sight of the path though, there were incredible views, a couple minutes of snow, and a couple "ranches”. I even ran into the fellows who must have lived in the "ranches" and were responsible for the Yaks. At the time though, these herders were picking flowers that had already bloomed and throwing them into a bag. No idea what that was all about. They sang a little but were not too interested in talking to us. Maybe they were miffed that we left the trail. *shrug*

After Yulong Mountain, the next stop was Baisha, another ancient town just outside of Lijiang. Baisha did not have nearly the charm of ShuHe, in fact, it was pretty beat up. There is a sort of ladder of Nakhi success… Baisha, ShuHe, and then Lijiang are the rungs (in that order, bottom to top).

The short ride back from Baisha was very interesting. The entire route was cornfields, and we were right in the midst of harvest. The Nakhi women, with their traditional outfits and baskets on their back were out doing the hard work of pulling corn off the stalks. The men were out stacking corn at the side of the road and loading it onto backs, bikes, horses, and/or flimsy wooden pallets made of branches. The children and dogs were playing in the roads. All the families of Baisha must have been out today, everyone doing their part.

Corn, sweet potatoes and sunflower are the lifeblood out in this area. You can’t escape it. In every village, or even small group of homes, a great many of the residences will have a second floor that is open to the elements. At the right time, literally thousands of ears of corn will be stacked on the second floor of every one of these houses, drying. You can certainly find fresh corn to eat here, but refrigeration is not the primary way to preserve food in these parts (just try to get a cold beer). It’s spices, smoking, drying, or simply, eating it RIGHT THE F*** NOW!!! There are no corporate distribution channels for these farms. It gets loaded onto a bike or someone’s back and taken into town NOW. Back to corn… you are most likely to find it dried and then cooked on the ear right to the point where it’s about to pop… and man., is that tasty. I could live the whole day off of some pork buns, cooked corn and sweet potatoes off of some old gal’s rigged-up portable kitchen…. maybe a little meat kabob too. :p