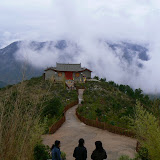 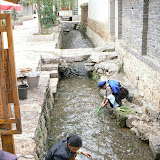 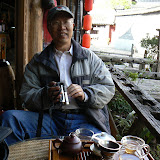 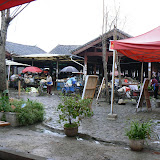 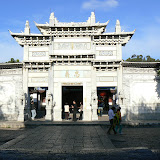 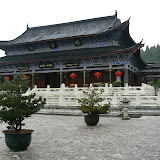 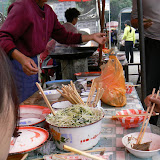 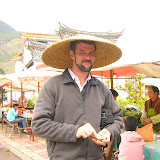 Shopping for hats in Shige 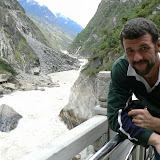 Hanging out at Tiger Leaping Gorge 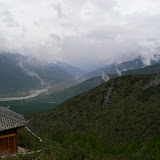 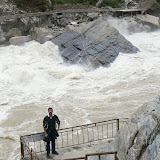 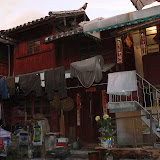 Here is part four (or day 4) of my recent trip to China, which is the third day in Lijiang.

The next morning, after visiting Yulong Mountain, I woke early and wandered about Old Lijiang. I typically get up at 6am regardless of “the night before”. This gave me roughly 3 hours to “break out” of the Inn and enjoy the fresh mornings of Lijiang, since Wei didn't get around so early. This was my routine while there. IMHO, morning is the best time to appreciate Lijiang (and the best time to take photos). The air is fresh, most of the shops are closed, and the tourists are scarce. For the most part, it’s kids going to school, farmers bringing in produce, and other locals getting ready for the day. By about 8am, the ancient lanes of Lijiang absolutely echo with the sound of children at school, an appropriate reminder that Lijiang has a future to plan for, as well as a rich history to preserve.

After wandering about, I’d stop at my favorite place for coffee by the Mu Mansion. Coffee is a tricky business in China. For the most part you will get very small servings by American standards, the price will vary widely, and then there is the Chinese “standard of service” to deal with.

By Chinese standard of service I refer to the fact that once they deliver your order, you are very unlikely to have another conversation with your waitress (or waiter) unless you initiate it. This includes paying your bill. You may literally have to get up and track someone down to pay your bill or, for example, get another cup of coffee. As anyone who has been tormented by an American waitress/stalker with too much flair, you can imagine that this might be a blessing or a curse. With respect to coffee, if you’re an American coffee-drinker…. it’s a curse. So, if you find a good place, you stick with it and I did.

As I was saying, every morning I would make may way to this place which would hook me up with a relatively generous serving of coffee. Not only was the setting quiet and beautiful, the coffee good, and the staff attentive, but each time I would show up the OWNER would sit with me and prepare tea. You can see all the tea “gear” involved with this in one of my photos. The day before this picture, the main Chinese TV network had taken some footage of his establishment during a story on Mu Mansion, so he was showing me some of it in his camcorder.

He spoke very little English and I spoke very little Chinese, so between the two of us it was an interesting conversation. He'd say something in Chinese and I would try to figure it out and respond in English or broken Chinese, and vice-versa. Oddly enough, I also ran into him on the plane back to Kunming. I should have gave my card as it seems fated that we should keep in touch and I missed the opportunity.

Later in the morning, I met our local guide (I guess that’s what she was) and left for a local market to have breakfast before proceeding on to the Mu Mansion and Tiger Leaping Gorge.

Mu Mansion was the official residence of the Lijiang tribal chiefs of old. My understanding is that “Mu” or “Mu Zheng” was the term used for the leader and not a family name. Lijiang and the Mu were not just regional powers but vital participants in the Empire’s military affairs and importers of Han culture. In fact, in some respects Lijiang ended up being the last refuge of certain aspects of Han culture. While other areas of China were being torn by civil strife, Lijiang managed to preserve things like ancient Han music and dance.

The Mu Mansion is a beautiful place that rivals the Forbidden City in Beijing, but on a smaller scale. The current mansion is likely not original structures though, as a good deal of it was destroyed during the Cultural Revolution.

At the highest point of Mu Mansion, with one of the best views of the city, is the San Qing Taoist Temple. The difference between Taoist and Buddhist is not something I want to get into, but often the two are synthesized into one. I would just say that temples which are at least a little bit Tao are the most fun. You’ll always find something really strange at a Tao Temple (or Chinese Buddhist Temple that has heavy Tao influence… hope that makes sense).

Wei had her fortune told here for the first of two times today. It was an involved process taking about 20 minutes. First a wheel-like device was spun (a turtle sculpture in this instance), which eventually stopped to point to a symbol, the symbol corresponded to pieces of paper in a wall full of slots, the paper was given to a priest that does even further manipulations with various tools, and then the priest told her fortune and made specific recommendations. I don’t know what all he said, but apparently once she gets back to Beijing she needs to buy three goldfish and release them into a river. :o

After Mu Mansion, it was off for Tiger Leaping Gorge. The first stop on the way was on the way was another Temple, this one with incredible views of the Gorge.

Wei had her fortune told a second time here. The ‘spinning wheel’ used at this temple was allegedly carved out of a single piece of wood and was over 600 years old (historical significance of the wheels must be a big selling point). Wei ended up making a contribution of 200 Yuan to this temple after her fortune was told! This was a startling event and an incredible insight into her character that I’ve yet to decipher. She is certainly tighter with money than any Scot I’ve ever met, constantly critiques my overspending, and forbids me to leave tips saying I’m ‘spoiling the Chinese’… yet... a 200 Yuan contribution to a random Temple? That must have been one hell of a fortune.

Our second stop was the village of Shige (sic?).

Shige means “Stone Drum”. The village of Shige is even older than Lijiang and still has its historic stone drum sitting on top of a hill near the main drag. Shige is no tourist stop. It’s a small village that’s a model of chaos turned into makeshift market every morning. We stopped here for some very unusual roadside grub which looked like gelatinized grey slime, and then headed on to the gorge.

Tiger Leaping Gorge is a canyon on the Yangtze River that is a contender for the world's deepest river canyon, depending on the definition used. The gorge was formed where the Yangtze passes between the 5590 meter Jade Dragon Snow Mountain and 5396 meter Haba Mountain in a series of rapids under steep 2000 meter cliffs. Legend says that in order to escape from a hunter, a tiger jumped across the river at the narrowest point (still 25 meters wide), hence the name.

If you are a back-packing sort there is a very well-maintained trail, with guesthouses even, that allows you to spend 2-3 days hiking the rim of the gorge and seeing some incredible views. I went for the 2-3 mile hike along the marble cliffs right next to the river. This ended up being a bit humorous, as there are multiple warnings advising one what NOT TO DO if one doesn’t want to be crushed by a couple hundred tons of falling rock. One is not to talk to loud... yet… every few hundred feet there was a guard dressed in camouflage with a megaphone who’d play a pre-recorded message… in English... at full volume... about how I should walk as close to the wall as possible. :p

The power of the water going through the gorge is incredible. The pictures don’t do it justice.

On the way back to Lijiang, there was a stop at the Lashihai Lake Wetlands. It’s an impressive preservation area where around 140,000 migratory birds spend their winters and a repertoire of 165 species of birds can be observed, some of them endangered species, including the black-necked crane, white stork and ruddy shelduck. Unfortunately, they neglected to tell us BEFORE we paid our way inn that NONE of these birds hangs out at Lahihai lake during the early Fall. Meh… it was a good walk anyway.

On returning to Lijiang, the guide invited us back to her home to have dinner with her and her fiance… real Nakhi food with real Nakhi people. Her home was in a courtyard residence just like Ivy’s brother’s place which you can see in one of the pictures. It consisted of two rooms with plywood finished walls and floors, and decorative plastic sheets to cover traditional Lijiang wood-patterned windows (no glass… and it does snow in Lijiang). The only kitchen appliance in sight was a rice steamer and the rest of the food was prepared in the common courtyard which is probably shared by 12+ residences.

The four of us sat around a two-foot tall block of wood and shared hot-pot with chicken, fish, potato, bean curd and a vegetable which tasted like spinach (but I don’t think it was). Hot-pot is basically a big communal pot that you throw everything into to keep warm and eat out of. We all ate out of the same pot (with chopsticks), and deposited our bones and whatnot directly onto the table, each of us having our own little stack of trash. Being Mister Anal-Retentive, I just had to find a way to compromise on this and eventually settled on asking for a separate small bowl to throw all my leftovers into. I think everyone else got a laugh out of that.

Sidebar --- My theory is that what many westerners would consider typical cleanliness or hygiene is probably viewed as wastefulness or extravagance amongst some Chinese. Wei certainly accused me of such a few times (her term was luxury). I consider myself pretty low maintenance by American standards, but by Chinese standards I would probably be one overbearing needy SOB.

While our guide’s fiance was very reserved during the meal, I’d have to imagine that having a six-foot-plus white stranger over for dinner was probably not something he had to endure all that often. He did his duty as a future spouse though by putting on a VCD of genuine Nakhi music during dinner. It was a great night and it comforts me to know that somewhere deep in West China some guy who’s never smoked anything other than 25-cent-a-pack Chinese cigarettes is enjoying the Montecristo Cigar I left with him.