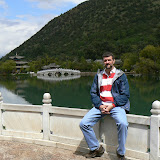 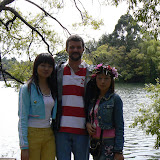 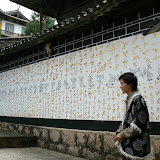 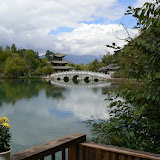 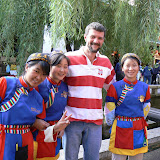 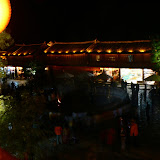 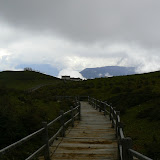 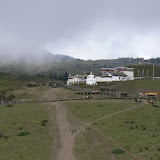 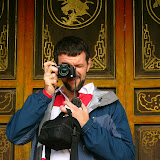 Here is part five (or day 5) of my recent trip to China, which is the fourth day in Lijiang.

The next day was all about hanging out in Old Lijiang and not spending hours in drive time. I did my usual morning thing and when Wei got mobile we walked around a bit more and then headed to Black Dragon Pool, which is where all of old Lijiang’s water runs through before being diverted down though the town’s myriad channels. It’s also home to one of the most famous scenic sights in China; the pool, the five-holed bridge, the Deyue Tower and, on a clear day, the Jade Dragon Snow Mountain towering over it all.

The grounds also contain a number of impressive temples, gardens, and a Dongba language school... probably the only Dongba School you will find anywhere. Dongba is a culture, a religion and a language. The Dongba script is an ideographic writing system (meaning it uses pictures to represent words) that is about a thousand years old. It is the only ideographic writing system in use today, and you will see some Dongba characters in my photos.

Being a Dongba student must be a pretty unfulfilling task though, as there is very little room for advancement. To be a master (or teacher) of the language, one must be a “Dongba”. To be a Dongba, your father must have been one, and his father must have been one, etc. According to the sources in Lijiang, there are only nine Dongba in existence, and two of them teach in Lijiang.

Finding the Dongba school was a minor victory on my part, as there was spirited debate beforehand about whether to even go to Black Dragon Pool. As Chinese attractions go, it was a bit on the expensive side (60 Yuan) and known for the being a huge tourist draw. Ivy’s brother said it was a ‘waste of time’ and Wei leaned that way, but I wanted to go regardless. Coincidentally, over the last three days Wei had tried to instill in me some appreciation for some weird Dongba culture thingamabob. So we come to Black Dragon Pool and... BINGO... the only frickin’ Dongba school in the universe. I’ll leave it up to your imagination how often I rubbed in that ‘waste of time’.

The rest of the afternoon was dedicated to eating, playing dice and learning card games. The first stop was the Sakura Cafe for a lunch of Hot-pot and playing Liar’s Dice. Later that evening we found some bar which had a third story overlooking the main square. There were bonfires going in the square and the Nakhi, along with some outgoing tourists, spent a good deal of the night dancing in circles around the bonfires while singing local songs.

Another thing to appreciate about the Chinese… they truly are a singing culture. Most Chinese I’ve met know many songs by heart, especially traditional songs, and won’t hesitate to share them. Laborers will sing while they work, children will sing on the way to school, and partiers will flock to the Karaoke bars in the evening. This doesn’t seem to be limited to older generations either as even the younger adult generation will do so.

Some closing thoughts on Lijiang…

Before coming to Lijiang, I read quite a few comments from other travelers and there seems to be a true love-hate attitude among foreigners toward the place. On the one hand there are people who think it is one of the most beautiful and peaceful places in China, and one of the last remaining places to see a China mostly unchanged by the rapid construction and growth occurring elsewhere. The other view is that Lijiang has joined a growing list of Chinese tourist sites gone mad, where there is little peace to be had and tackiness/overkill runs rampant among merchants. Many of those who don’t like Lijiang are quick to recommend the nearby town of Dali over Lijiang.

I can’t comment on Dali vs. Lijiang argument, but I would suggest that some of the negative comments come from people who want culture and the traditional Lijiang delivered to their doorstep. To those people I would say perhaps you need to wake up a little earlier and see the city come to life and leave the main streets that are crowded with merchants (which is little different than any Chinese city). This is when and where you will see the real Lijiang, a Lijiang that I think anyone could appreciate.

Lijiang is also a great starting point for many adventures in the surrounding area; ShuHe, Baisha, Tiger Leaping Gorge, Mt. Yulong, Lake Lugu, etc. You could easily spend a couple weeks staying in Lijiang just exploring the areas near by. Put a little research into your visit and don’t expect to be spoon fed your vacation.