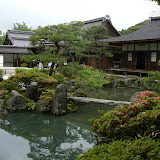 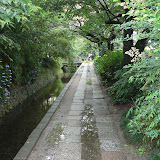 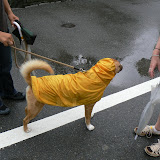 Big dog in a little coat... 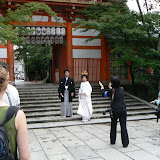 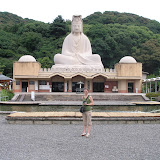 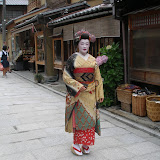 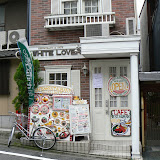 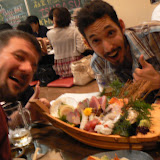 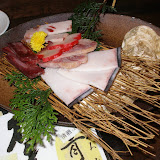 You gonna eat your whale?

On Saturday, we started by going to the northeastern corner of Kyoto to see Ginkakuji Temple, also called the Silver Pavilion. In 1482, shogun Ashikaga Yoshimasa built his retirement villa here. A few years later, the Silver Pavilion, modeled after Kinkakuji (Golden Pavilion), was constructed. Today it is a Zen Temple. Unfortunately, they never got around to covering the Pavilion in Silver, but that was the plan at one time.

The main building here was under renovation, and under wraps, so we didn't get a good look at it. The Zen gardens and views of Kyoto made it worth the time anyway.

After Ginkakuji, we strode the Path of Philosophy, or Philosopher's walk, which is simply a a pleasant path besides an old canal that connects Ginkakuji with the vicinity of Nanzenji and lands you close to the Gion District (Geisha District).

Cherry trees are planted along most of the over one kilometer long path, making it one of Kyoto's most popular spots for cherry blossom viewing in spring. Today though, it was mostly just a popular spot for getting wet in the rain. There are a number of Temples and other historical structures along the walk, some we stopped at and some we just glanced at. We stopped at Eikando Temple for about 30 minutes and sat under a shrine because it was raining so hard. That didn't stop some other fellows and priests from holding a special service there though.

Past the end of that walk, we ran into some couples getting married at a Shinto Temple. One couple was taking their wedding photos in traditional garb, while another was 30 feet away getting married within the shrine. Didn't stick around long enough to see if they were moving couples through assembly line fashion... NEXT!

We made a quick stop at Ryozen which is a shrine to memorialize soldiers of all countries who died in the war. In talking to people in Japan and seeing some of their public pronouncements, their is a very obvious commitment to peace and not revisiting history here, and maybe a little shame at past actions as well. War is actually outlawed in their constitution. After that we wandered through some beautiful neighborhoods in the San-Zen area and ended our walk in Gion (the Geisha district)..

I think we saw one real Geisha near the Gion area, but we saw a lot of fakes. You see many fakes in this stretch of Kyoto during the day, as you can pay to be made up as one and walk around. A local could easily tell the difference, but a sure giveaway is probably how they walk in the awkward shoes.

Being a Geisha (also called Geiko) is a serious business in Kyoto. In fact, the word originated in the Kyoto dialect. It's not something that exists for the benefit of tourists. Geisha's are not prostitutes, nor are they the same thing as the "Geisha girls" who hung out with Allied servicemen during the occupation. They are professional entertainers. Of the five Geisha areas in Kyoto, only one is still a going concern and that is Gion, which has many functioning teahouses (where Geisha's work and that are sponsored by wealthy individuals) and a Geisha school (where Maikos learn the craft).

Geisha has been a declining profession. In the 1920's it was estimated that there were 80,000 Geisha, now there are perhaps 2,000. We walked through Gion area but it was daytime and nothing was going on at that time of the day. We made our way back to the hotel and cleaned up for dinner.

For dinner, we ate at a place that was our first choice on Saturday but was too busy for us. Sushi! Sushi boat! Good stuff. Cody also ordered a plate of whale sashimi... mixed pieces from five different parts of the body. Most pieces were very fatty and salty. One was a lot like eating raw bacon. The skin (the white piece with gray border) was very chewy. One Japanese guy got so hammered here that he couldn't even get up by himself. A couple guys had to carry him out... he kept his food down though, thankfully.

The next morning we had some time to kill before going to the airport. We were planning to go to the Kyoto Museum, but found out when we arrived that it's closed on Mondays. One thing I did photograph there was some rather unprotected bicycles. You see this all over Kyoto, even on main streets... unlocked bikes. What other city of 1.5 million people do you know of where you can leave an unlocked bike on the street and not worry about it being stolen?

With the Kyoto Museum closed, we made our way south a few blocks to the Nishiki Food Market, several blocks of covered vendors selling all sorts of vegetables, meat, candy, etc.

Finally, we were off to the airport, which was also very interesting because it was Kansai Airport. Maybe you've seen the Discovery Channel show on engineering marvels? Kansai Airport is located on an artificial island in the middle of Osaka Bay. Three mountains were excavated for 21 million cubic meters of landfill during the initial construction. In 2001, the airport was one of ten structures given the "Civil Engineering Monument of the Millennium" award by the American Society of Civil Engineers, even though some people considered it a public engineering disaster after an initially under-estimated rate of sinking. More info here.

To tie things up, Kyoto is a excellent city to visit and one of the great cities of the world. In addition to having enough historic sites in town to keep you busy for quite some time, there is a surplus of cultural attractions as well. Thanks to the layout Kyoto is also one of those cities where you can walk to any of these places. The only other place I've seen that is so convenient and compact is Amsterdam.

Perhaps more importantly, Kyoto is a perfect headquarters for making day trips to other places in the area. Thanks to the efficient public transportation system, places like Osaka, Kobe, Himaji, Nara, and many more are roughly an hour away. If you're interested in Japan and it's history, but don't want to spend most of your trip in airports, Kyoto is the perfect place to spend a week.