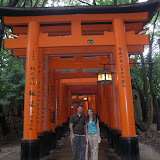 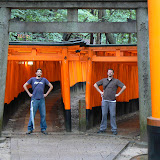 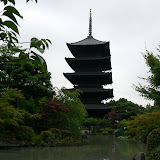 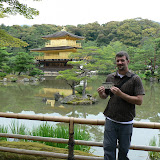 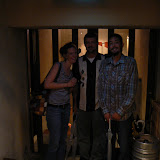 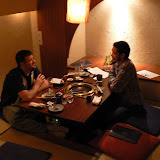 For the weekend, the plan was to see as much of Kyoto as possible. I wanted to start off in the mornings with a couple major sites and then spend the rest of the day wandering. I left most of the Kyoto sightseeing for the weekend for a couple of reasons, 1) I figured there'd be fewer people at Nara and Himeji during the week, 2) my brother Cody was going to meet us for the weekend and I wanted his help using the buses to get around Kyoto as cheaply as possible.

Cody's been teaching English in Japan for a few months and has had enough free time to see most of the major cities a few times over. I think this was his 4th or 5th time in Kyoto. He took an overnight bus from Matsue and made it to the hotel sometime in the morning. The first thing I had to do was go down to the lobby, where he was sleeping in a hard back chair, and wake his ass up.

After leaving the Hotel we were headed to Toji Temple. Toji was founded in 794 when emperor Kanmu moved the capital from Nara to Kyoto, and was thus one of the earliest Buddhist temples. The temple grounds were modeled after the Chinese city of Changan (the Chinese Capitol at the time). Its five-tiered pagoda is 57m tall, making it the highest wooden tower in Japan. It was last rebuilt in 1643 after having burned five times. A third reason for waiting until Saturday to travel the city, was that the Kobo-san market is held at Toji Temple on the 21st of each month... perfect timing, and planned. The market was definitely a notch above, with plenty of food, quality antiques, clothes, furniture and even some racy books for sale. Quite a few priests were about, conducting services and such, as well.

The next stop was the Fushimi Inari Taisha Shrine. Fushimi Inari is the HEAD shrine of the more than 30,000 Inari Shinto shrines throughout Japan. Fushimi Inari enshrines the god of good harvests and good business. As Saddam might have said, it is "the mother of all Shinto shrines". There are probably a couple thousand Torii gates here, of various sizes. Torii gates are supposed to signify the entrance to another realm and purification. Many (most?) Torii are donated by private individuals and businesses to curry favor with the enshrined gods. Most also have the name of the donor written on them.

In addition to the major shrines, there are also a hundred or so smaller shrines here. Many of these are stacked with smaller Torii, and have the standard bell in front (the big shrines at Fushimi have many bells in front). The bells are there to get the spirit's attention. Typically, you would ring the bell and clap your hands a few times (process varies) to get the spirit's attention, and then bring up your business (say a prayer). Fushimi is a huge place, with a 3km walk to the top. We only went about half way since it was incredibly steamy and we still had a few stops to make. You seen one Torii...

The next stop was Nijo Castle which is smack dab in the middle of Kyoto. It's also a UNESCO Heritage site... shocker! Whereas Himeji was of primarily military value, Nijo had a more diplomatic purpose. It was built in 1603 as the official Kyoto residence of the Shogun. It's a beautiful spot with low buildings and intricate gardens.

The final major stop of the day was Kinkaku-ji Temple (The Golden Pavilion). Kinkaku-ji's exterior is layered with actual gold leaf. It was originally built in 1397 as a villa for Ashikaga Yoshimitsu (1358-1408), third Ashikaga Shogun. 11 years after his death, the villa was converted into a Buddhist temple. In addition to the temple and some other structures there are beautiful gardens here.

The Japanese take the whole garden thing rather seriously. The photos don't do them justice but most public gardens are probably better kept than most U.S. homes. The guys that take care of the temple grounds aren't tromping across the lawns with power blowers and leaf trimmers either. Their standing on ladders with a pair of scissors, cutting a couple leaves at a time or a small branch, checking it out, maybe cutting some more. These guys are artists.

After that we wandered around a bit more and saw another temple but we were pretty pooped having covered three corners of the city, so we hit the hotel to get cleaned up for dinner. Once we hit the street again it was raining harder than ever, and I needed to get money... which was about five blocks away. I volunteered to do this alone while Buffy and Cody waited at the hotel. Bad idea. By the time I got back, I needed to change... drenched.

Our next problem was that we were determined not to take the easy route and eat at the same place for the third time. The rain had eased up just enough to make walking a couple blocks not seem like a completely stupid idea, and there were plenty of interesting food places around... BUT THEY WERE ALL FULL. You absolutely have to make a reservation on a Saturday night in Kyoto.

By the time we found a place that wasn't full, we had probably walked a mile in the rain and had killed an hour stopping at every interesting restaurant on the way and arguing with the staff. The place we finally stopped at was pretty good though, specializing in meat dishes (including a lot of raw beef), but having a little of everything. Little barbecues were built into the table. Raw beef was definitely the thing here though. Cody ordered a beef hand roll, and the beef was raw... kind of a surprise. Buffy ordered a salad and it was tossed with raw strips of beef... very much a surprise. She pulled the strips out, dressing and all, and cooked them on the BBQ. Cody just went for it. Nothing much bothers him... except hot oil rubs. :o

... AND LATER THAT NIGHT... we did go back to the same place for the third time... but just for drinks. They had a sake there that was incredible, so we had a nightcap. :)