I had no idea who the 'Guardians of the Galaxy' were, but the new movie generated an unhealthy interest. It was the right mix of comedy and adventure to suit me, and I figured there must be some good backstory there. Who were these guys and how did they rank a movie? About the same time I learned about Marvel Unlimited (subscription access to 15000+ of their back issues), was called up for jury duty, and had just finished a novel. Marvel Unlimited was the perfect vehicle to fill the boredom in between jury sessions and to 'bone up' on Gaurdians trivia.

Turns out that was no simple matter, the history of Starlord and the Guardians is even more disjointed than most superhero sagas... and the Marvel Android app is... troublesome. Wanting to go as far back as I could, I searched between the Marvel app and Wikipedia to put the main pieces of their story together. Here's what I came up with and my apologies to any fanboys who know better. 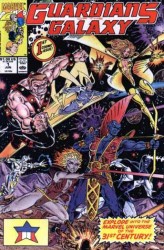 There was an original Guardians of the Galaxy team, first appearing in 1969 throughout various Marvel titles. They would show up to help folks like Captain America, Thor, The Avengers, and such to battle the Badoon (a reptillian species of bad guys intent on destroying Earth). They merited their own comic series run in 1992 that lasted 60 some issues. I have not found these in the Marvel subscription. These Gaurdians originated from the far future (31st Century) AND an alternate marvel time-line. While not important to the movie, members of this team show up in the future team's comic book adventures. In fact, one of them becomes a de-facto member of the new Guardians for quite some time (Major Victory/Vance Astro who carries around a Captain America shield). Another of them, Yondu Udonta, is completely recharacterized as a minor antagonist for the movie version of Gaurdians. 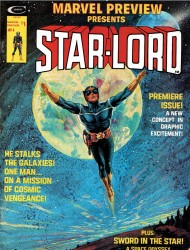 There was an older Star-Lord, first appearing in 1969 and popping in for various Marvel titles. His story was collected and reprinted, in color, in 1982. This incarnation of Star-Lord was extremely idealistic and powerful! While most of his origin story was discarded later (and any 'super-powers' were eliminated), some elements remained and are referred to in future Guardians comics (e.g., his dad being the Emporer of Spartoi). Within the Marvel subscription, you can find this origin story by looking under 'series' instead of 'character'. They have been repackaged as:

Please note that the spelling of Star-Lord changes over the years.

Many of the other Guardian characters also made appearances in old Marvel comics. Too many to list but for some minor background before getting into the major events:

Rocket Raccoon: Tales from Halfworld (1985) - Rocket shows up for Marvel as early as 1976. In 1985, he merited his own four issue series, later repackaged as Tales from Halfworld. I doubt they had any idea he was going to be a Guardian when this came out. According to wikipedia, in the character's first 30 years of existence he only appeared in 10 comic books. Halfworld is referred to much later in the Annihilators event (and is revisited in the Annihilators series). Another trivia item, Halfworld  is penciled by Mike Mignola... who eventually went on his own and created Hellboy, B.P.R.D., and others.  As of 2014, Rocket has his own series.

Thanos #7-#12 (2004): Background for the Thanos character's activities in the Annihilation series. Thanos visits the prison Kyln, where he meets Peter Quill. At this point, Quill is in self-imposed exile as a prisoner on the Kyln (he turned himself in) and denies the Starlord title (spelling change). he also has cybernetic implants. He is Gladiator's right-hand man (a shi'ar super-powered prisoner). This series also leads into Drax's Earthfall appearance.

Drax the Destroyer: Earthfall #1-4 (2005) - Not an origin story, but introduces a minor character (Cammi) that keeps showing up later, even though she has remained completely irrelevant... so far... and has no powers. Drax first shows up in Ironman (1973), but has a major role in Warlock and the Infinity Watch (1992-95) as a team member.

Gamorra: Gamorra has a long history that I haven't followed. She started off in the Warlock series. She's boning Warlock and/or Nova in Annihilation, but I don't remember which. Warlock is very prominent player in Guardians history, basically a team member at the start and and adversary at later points.

Annihilation (Mar 2006 - Apr 2007): The negative zone tyrant  Annihilus invades the Universe and succeeds. Features many future Guardians team members. Starting the series as a despondent prisoner on The Kyln, Peter Quill (Starlord) is a "a master strategist and problem solver who is an expert in close-quarter combat". During the series he helps Nova lead the rebellion against Annihilus. He still doesn't like anyone calling him Starlord due to previous events. I'm sketchy on proper order, but as far as publishing goes. 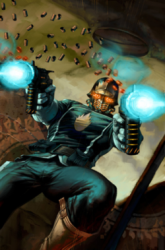 Annihilation Conquest (June 2007 - Apr 2008): A weakened universe is now attacked by the Phalanx, lead by Ultron. Quill is solidly back as Starlord, stripped of his implants, and leading an unnamed team with members recruited from a Kree prison (Bug, Rocket Racoon, Groot, Mantis, Deathcry, Captain Universe). Near the end Starlord proposes the formation of a permanent team to protect the Galaxy. 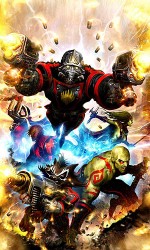 Guardians of the Galaxy (2008-2010): The Guardians get a HQ (Knowhere, ran by Cosmo the Russian dog cosmonaut). The membership is a little more high-powered, starting with: Star-Lord (spelling change), Rocket Racoon, Groot, Drax, Gamorra, Quasar (Phyla), Warlock, Mantis. New members come in and some go out during the series. Major series events and/or spin-offs:

Annihilators #1-4 (Mar - Jun 2011): Acting on a request from the presumed dead Starlord, Cosmo the cosmonaut (who appears in the movie, escaping from the Collector's lair) puts together an 'Alpha' team to protect the Galaxy. Members: Quasar, Silver Surfer, Ronan the Accuser, Beta Ray Bill, Gladiator, Ikon and Cosmo. They fight the Dire Wraiths and the Universal Church of Truth. In every issue, there is also a second mini-comic... a continuation of the Rocket Raccoon and Groot story line.

Annihilators: Earthfall #1-4 (Sep - Dec 2011): The Annihilators travel to earth to stop the Universal Church of Truth's attempts to resurrect the Magus, but need to tangle with Earth's Avengers first. In every issue, there is also a second mini-comic... a continuation of the Rocket Raccoon and Groot story line. 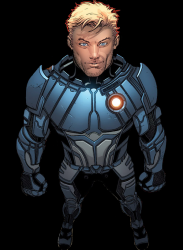 Guardians of the Galaxy (Feb 2013 - Present): Starlord is inexplicably back, with a makeover. The series is supposed to explain his return from the Cancerverse soon, if it hasn't already (the subscription only includes issues after they've been out for six months). The team from the movie is present, with temporary member... Ironman. The focus is on a conspiracy against Earth, led by Quill's father Jason, the Spartoi Emporer, which includes fighting the Badoon. Thanos is also back for this.

Legendary Star Lord (Sept 2014 - ): A new series to follow the movie more closely. The look... and spelling... are changed again. Haven't read these. 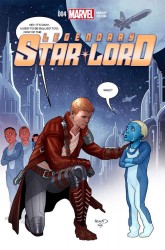