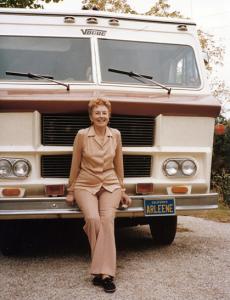 On July 4th of last year my Grandmother Brown passed away at 88 years old. About six years before that she became suddenly ill, eventually suffering reduced use of her lungs and other issues requiring her to take prednisone on a daily basis, carry around oxygen, and have almost full-time care by a part-time nurse, my Mom and my Aunt Linda. Up until that time she had been very healthy for a woman of her age. My Great Grandmother Kirby had lived into her 90's, working regularly in her garden.

Grandma Brown always had a smile and kind words for just about anyone she met. As with many of Americans of her generation, she was very patriotic and devoutly Christian. She would often tell stories of her early family life. When she was a child the family lived week to week, moving wherever there was work and enjoying simple and rare pleasures, like an extravagant trip downtown for an ice cream sundae, the single new Christmas present she got one year, or 10 cent boxes of oatmeal. As a young adult at the time of WW2, she could relate how everyone pulled together in salvaging scrap materials and rationing goods. She'd never complain, just laugh about how different things and people are now.

I'd always wanted to save some of those stories. About six months before she passed, I asked if she would be interested in telling some of them with a digital tape recorder whenever she felt good enough. She said she would, although she could not talk very long in her condition. So I bought one for her and over the next couple months she managed to make 20 or so brief entries. After she passed, my Mom and I also found some 8MM video recordings in her belongings. She had quite a few of these at one time, but most of them had been stolen and trashed by thieves who had broke into her house once.

Very little of the video tapes were in watchable condition, and none of them had audio, but I did splice together roughly 30 minutes of them, in 4 short segments. I then added the audio clips from Grandma as a soundtrack. Some video clips are only seconds long, but they cover events from the 50's all the way to... I'd guess... the 90s. The audio refers to a time period much earlier than any of the videos.

Thank you Grandma for all the time you spent watching over and praying for me and all the members of your family.

Grandma Brown Video #1:
These are the oldest of the videos, I'm guessing from the original family homestead in Kansas. Some good moments of folk working with the livestock and doing maintenance on the irrigation. I don't know everyone but I'm sure these are great-great-grandparents and other relatives. Near the middle is Grandma Brown, in white shirt and red pants, petting a horse. My Mom and Aunt Linda might be the girls in checked dresses. Near the end there is some video of a later vintage (I think). My Mom and Aunt Linda are driving a tractor and helping with an irrigation trench, later on the riding board of a truck.

Grandma Brown Video #2:
This is an interesting peek at the camping scene of the late 50's or early 60's. Very basic campgrounds with old cars pulling dew-drop & aluminum trailers, everyone pitching in with meals and clean-up. Grandpa Lewis (Grandma Brown's first husband) is here in a light blue jacket, so are Great-Grandpa & Grandma Kirby (both deceased).  There's a scene of Mom and Aunt Linda by a stream and Grandma Brown laying down with rocks stacked on her face. Another scene with Mom & Linda playing cards. Another scene with their immediate family (Kirby and Lewis) using a swimming pool. The final half is the immediate family and some boyfriends (?) going boating. There's a little scene at about 5 minutes in with three girls drinking pop, the first is Aunt Linda, the second I don't know, the last is my Mom.

Grandma Brown Video #3:
This video starts with Aunt Linda in a graduation gown, soon visited by Great-Grandma Kirby and her poodle. Then there is a short shot of Grandma Brown working in her Beauty Shop, which was located in the back room of her house... probably could not do that these days with all the regulation, but I remember hanging out there quite a bit until I was 10ish. After that, there is Christmas 1966. I know it's 1966 because I'm in the video and it's my first Christmas. I'm the little guy in red! From the video sequence it would appear obvious that we went to three different places to celebrate Christmas that year: Grandma's house, some other place for a more formal event, and then our house which, at the time, I think was across the street from Grandma (or it may have been on Camphor Street by that time). Lots of folks in here, including Rick Bressler and Grandpa Lewis, who both fell out of our lives shortly afterward due to divorce. Grandpa Lewis was seen maybe once by me between the divorce and his death. Aunt Linda is the tall brunette. Mom is with auburn hair and often sitting with our old dog Tobey who ended up losing a leg at some point and spent much of his life as a tripod. Grandma Brown is the one modelling the fancy new white boots. Great-Grandma Kirby has her poodle on her lap. Finally, there is a bit of video with me and my First Birthday Cake!

Grandma Brown Video #4:
The audio runs out about half way into this video which opens with Grandpa Brown (deceased) cleaning his camper. Grandpa and Grandma Brown were big travellers taking their rig all over the southwest. A frequent camp-out of theirs was Mountain Lakes which shows up later in this video. Grandpa Brown (usually just called 'Brownie') was a very accomplished engineer who also had a passion for learning all there was about the Southwest and Indian cultures. He would often be seen in interesting hats, with turquoise belts and bolo ties made with pure silver (he also had some great pistols with accompanying dual holsters). After Grandma's death, one belt of his was appraised at over $2000. The other big fellow with white hair was Uncle LaVelle, Grandma's brother (deceased). He can be seen a couple times, once walking with Great-Grandma Kirby. Towards the middle of the video is some scenes filmed at Aunt Linda's old home in Ontario where they kept horses. There is a scene of me playing Monopoly with Cousins Tawnya and Charlynda, and them playing with some of their animals. Big hair was in! Finally, the video ends with Great-Grandma Kirby's 90th Birthday Party.