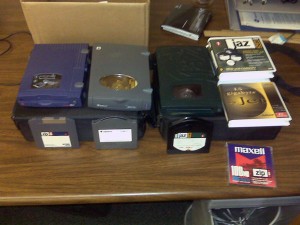 I've been tossing out PC-related junk over the last year.... obsolete keybords, mice, cords, etc. Anyone who's worked with PC hardware over the years has tales of the unbelievably inadequate hardware they used to work with... at least by today's standards.

External Data storage is one the most easily quantifiable areas of change with which to bring home how far things have come. When I started playing with TRS-80s at school we had cassette tapes and 5 1/4 inch floppy drives. There were also 8 inch floppies around. After that, the 3.5 inch floppy reigned supreme for many years, mostly available with 1.4MB of storage. Eventually the re-recordable CD became the standard with 600MB or more, then re-recordable DVDs with 4GB (4000MB) or more, and now any number of USB & Firewire devices are cheaply available. For less than $30, I can now carry around 32GB on a drive no larger than my thumbnail.

There was a short point in time though (1999ish),  between the dominance of the 3.5 inch floppy and the re-recordable CD, where the next big thing was not so clear. There were a series of portable external drives that were quite popular. In fact, some PC manufacturers (like Dell) bet on the Iomega Zip drive and let folks configure new PCs with an internal version (I have one of these).

Pictured here are three drives Buffy and I went through during that time, the Iomega Zip (100MB), the Syquest SyJet (scsi 1.5GB) and the Iomega Jaz (scsi 2GB).  I don't miss them or the two pounds of cabling and power cables that you needed to carry around with them.