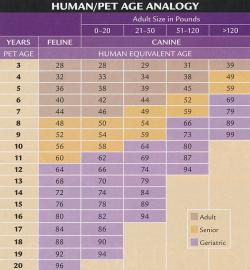 A few months ago, I was taking Phoebe on her walk.  These days, this isn't much of a walk at all but she enjoys it. She's coming up on 15.5 years old and getting a quarter mile out of her can be a challenge, often requiring a stop about two-thirds the way through. I walk the Dutch separately now, as we like to go for a brisk 2.5 miles over a hill and through a small valley, before I pick up Phoebe.

As we reached the last (and slowest) leg of Phoebe's stroll, I wondered about the common assumption that a dog year is the equivalent of seven human years (making Phoebe something like 110). Where did this come from? Also, if based on average lifespans, I'd think it would need some updating as the increase in human lifespan has probably outpaced the canine's.

Almost as if in response to my musing, a copy of the Fall issue of Healthy Pet landed in the mailbox with an article addressing exactly that subject. According to a handy chart included with the article, the whole seven years thing seems a mere popular fallacy. The human years equivalent not only varies as a dog gets older, but is largely determined by the weight of the dog. Weight does not necessarily refer just to fat dogs but to the fact that larger breeds typically have shorter lifespans than smaller ones. Dogs over 120 pounds are the human equivalent of 99 by the time they're 9 years old. Dogs under 20 pounds have a human equivalent age of 54 at the same point.

In Phoebe's case, there is some good news and bad news. The good news... she's roughly the human equivalent of 92 years old instead of 110. The bad news, they don't even list an age for dogs over 16 in her weight class. :(