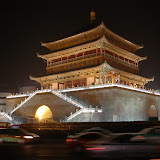 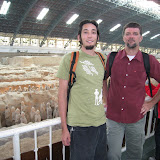 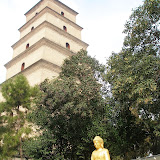 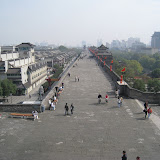 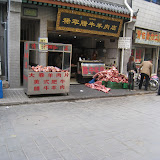 Nothing like a pile of carcas to draw in customers 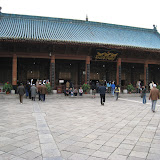 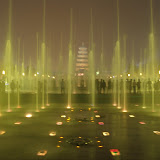 We spent most of the 24th getting to Xian. Almost as soon as we made it to town, we were on foot headed to the City Wall. We estimated that walking there from the Square Youth Hostel would be a quick hike. Wrong. We did make it, sometime after dark, and managed to see a lot of interesting stuff on the way.

I'd been to Xian in 2003 but it was rushed as there's quite a lot to see in Xian. Xian has a long and distinguished history as the first Chinese Capitol city and home to some of China's signature attractions (like the Terracotta Warriors). In 2003, it seemed like a pretty beat up, dusty and depressing city. It's still dusty (smoggy) but they have been building like mad in Xian since then. New office buildings and apartments have popped up everywhere. The average age of residents seems to be on the youngish side too, probably due to multiple colleges located in the city.

Traffic in the downtown area might be the worst I've seen in China. There is a constant crush of buses and taxis moving in and out of the central city, the area enclosed by the city wall. Quite the opposite of towns like Lijiang, Dali, & Pingyao... Xian decided to make its walled area the major commercial section of the city. There are only so many ways to get inside the City Wall (limited gates and single lanes each way), so... bam... everyone has to use the same entrances. It's a great place to see buses packed with probably three times their legal capacity, and then more buses lined up behind that one as far as the eye can see. At the wrong time, it's a nightmare to get in and out.

We walked all the way to the Bell Tower that night, arriving starved and parched from the dust and traffic exhaust. The Bell Tower is the center of the city, with major roads meeting for a big huge traffic circle (I hate those things). The only way to get to the Bell Tower is to walk underground. There are some great views from there at night... like the McDonalds on every corner, the KFC on every other corner, and a couple Haagen-Dazs stores scattered about.

On the 25th, we took a small organized tour to see some local, yet out of the way, attractions. Primarily, the Terracotta Warriors. This is a fairly efficient way to do things as the warriors are a good deal out of the city and you can learn a lot of unrelated information from English speaking Chinese guides.

The first stop today was the Banpo Museum, an archaeological site first discovered in 1953. It contains the remains of several well organized Neolithic settlements dating from approximately 4500 BC. The entire settlement was roughly sixty square kilometers and surrounded by a ditch, probably a defensive moat. The museum highlights some of the best preserved residences, a portion of the moat, and some recovered burial sites. Interesting stuff.

The second stop was the worst example of a 'manufactured tourist attraction' that I've seen in China.... The Quin Tomb. From my previous visit to Xian, and multiple Discovery Channel shows, I know that the tomb of the first emperor, Quin, has never been opened. I also know where it is, a squat wooded hill (eroded pyramid) that's roughly a mile from the Terracotta Warriors. I was curious to see what the hell was going on with this "Tomb". Turned out that it was nowhere near the real tomb but merely a dressed up office building in an unremarkable section of town. The bulk of the attraction is one room with four walls decked out like an oriental version of the "Small World" ride at Disneyland. The middle of the room has been lowered and they've slapped down a phony casket and wax corpse of Quin, sitting atop a relief model of China, to serve as the pièce de résistance of this bad opium trip. The place was ABSOLUTELY PACKED with Chinese tourists. It probably took 30 minutes just to shuffle in, walk the walls, and get the hell out.

Finally, we made it to the Terracotta Warriors. Well worth visiting twice, but if I recall correctly, in 2003 it was a liesurely stroll with plenty of photo opportunities throughout the humongous main hangar of Pit One. On this visit, we had to shuffle through it all, often pushed against the walls. Plenty of notes for this from the 2003 trip.

Returning to the Square Youth Hostel afterward was an unbearably long and contentious trip through Xian city traffic. By the time we returned it was dark and we decided to grab dinner at a place directly behind the hostel. The food ended up being great and, as a bonus, there was a table full of Chinese guys near us trying very hard to drink each other under the table. Good food and good entertainment!

First item on the agenda today was visiting the Big Goose Pagoda. The Big Goose Pagoda was immediately across the street from the hostel. In fact, our hostel is one of the areas I remember being part of a dusty parking lot for tourist buses in 2003. Now the entire area is developed with new office buildings. The Big Goose Pagoda itself was originally built in 652, although the structure was rebuilt in 704 and its exterior brick facade renovated during the Ming Dynasty.

After Big Goose Pagoda, we went back to the City Wall. Xian is one of only three cities that still have their complete city wall (Pingyao and Nanjing being the other two). Most city walls were destroyed either during the warfare of the early 1900's or by command of Mao after the Communists came to power. Xian's wall is well maintained and they allow you to ride bikes around the entire 17km route... so we did. Without stopping, it would have taken about 45 minutes to ride the whole thing.

After the round trip of the City Wall we spent roughly an hour wandering streets in the SE section of the central city, looking for Wolong Temple. Even though we asked a half-dozen or so Chinese people for directions, I don't think we ever found it. Eventually we gave up and grabbed a taxi for the NW section of the central city, portions of which are often referred to as the Muslim Quarter.

The Muslim Quarter is one of the most interesting places to wander in Xian, with many ethnic foods and other interesting merchandise available. Within the Muslim Quarter is also the Great Mosque, first built in 685-762. It is an active center of worship for the city's Muslim and Hui minority. Even though it's well used, and a popular stop for wandering westerners, it's clear that few resources have been spent restoring the place. It looks very much in original condition. Also, unlike most tourist stops, very few Chinese tourists were here, mostly westerners and people using the Mosque (we were there during a call to prayer).Unlike most mosques, the Great Mosque of Xian is completely Chinese in its construction and architectural style, except for some Arabic lettering and decorations. It has no domes or traditional-style minarets.

At the south edge of the Muslim Quarter, and across the street from the Bell Tower, is the Drum Tower. We checked that out before deciding to get out of the central city, ahead of the evening traffic rush.

Our final activity in Xian was the "biggest water show in the world" (according to the Chinese). There is a roughly two football field long, and 100 feet wide, section of plaza just north of, and adjacent to, the Big Goose Pagoda that is riddled with water spouts and lights. During the day you can walk over it, but twice a night it turns into an impressive water show accompanied by classical music. Adding to the spectacle of the show itself, is that every 100 feet or so is a roughy 15 foot wide walkway where spectators can stand. This seems to work out pretty well, but in at least one case a particulalry strong waterjet experienced an entertaining drift pattern when it reached it's peak, shut off, and let the wind guide it back down. It quite rapidly cleared out half the walkway next to Cody and I and sent probably 50 people running for shelter. For the rest of the show we had to keep checking behind us to make sure we weren't next.

Tomorrow, back to Beijing.