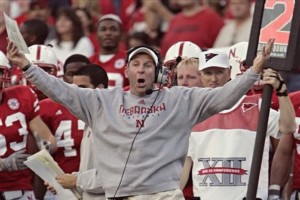 Here we go again with Cornhusker Football. Big Red is likely in a better position at this point than any comparable year with Bo Pelini as head coach... 8-1 is fine. You'd think they are sitting pretty. But... six years in a row with exactly four losses since Pelini started guiding the team... EXACTLY FOUR LOSSES! Not being a complete college football junky, I don't know if that level of consistency has ever been achieved by a head coach, anywhere. I doubt it.

What are the chances that Big Red could end up in that spot for a seventh straight season? (See poll next to article) On the face of it, I'd say impossible. Odds against doing that seven years in a row have to be astounding, even if you were shooting for it. Yet... six years in a row... I don't know that I'd bet the farm against a seventh. Also note, the 2014 Huskers have yet to be upset by a non-ranked team (another Pelini tradition).

There is a three way tie for the top of the Big 10 - East. The last three regular season games include the other two of those teams (Wisconsin and Minnesota) and Iowa. Minnesota AND Iowa upset NE last year. On an average day, Wisconsin is arguably as good as NE (but not ranked as high). Not trivial games.

OR... the curse is broken. This would almost certainly include a shot at Big 10 Championship. A win at the Championship could provide some small chance of a playoff visit (as long as the committee doesn't dump them three slots again just because they don't play the week before the Championship game)?