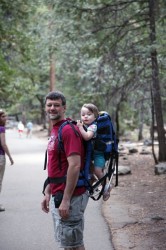 I'm a little behind, due to all the other work I've been doing on the site lately, but the weekend after our trip to Safari West with the Baers we took off for a 4 day trip to Yosemite. When I was much younger, I used to take many trips to Yosemite, Kings Canyon and other of California's parks. These were generally camping trips (tents or trailers). However, it's been a very long time. I'd guess that I haven't been back for at least 15 years.

Camping was probably out of the question with an infant (Fianna) and the Baer's two kids (Jakc & Amanda) in tow. We stayed at the Yosemite View Lodge in the village of El Portal, just outside the park border. The Lodge (really a motel) was a great place to stay and had very convenient access to Yosemite Valley. I'd guess it was 15-20 minutes to the Valley facilities. The big attraction of the Lodge, for me, was being right on the Merced river. In fact, we had a balcony overlooking the River and the wooded hills on the other side. Very nice. In addition, there were pools, hot tubs, and places to eat. While the main restaurant had ample menu and quality, the real find was the pizza joint right next to it. Some of the best pizza I've ever had, and... available by the slice. The only downside (and not a big one) was some severely limited broadband access and some rather rigorous policies on open containers. ;)

On the way into the park we walked around the Hetch Hetchy Reservoir a bit, and imagined what it would be like empty (as it may end up if more folks become convinced that it should be torn down).

We spent roughly a day and a half in Yosemite Valley, which is busier than I ever remembered it. By virtue of it being such a confined area it has become quite an anthill of activity. Certainly not someplace to find any peace and quiet, but with excellent availability of traveler services and transportation through the area. We did a couple of small (but rigorous) hikes there, with Robb and I sporting the baby backpacks for Fianna and Amanda. We had a pretty good workout. We also checked out the bar (of course) at the famous Ahwahnee Hotel.

Beyond the valley, we spent some time at Glacier Point where Robb took great photos. Farther down the same road, we spent another day in Wawona which was a national recreation area before there was a Yosemite Park, and has been an important stopping point for anyone heading into the park since the mid-1800's. We spent some time at the original settlement there, hiked through the Mariposa Grove of Giant Sequoias, and stayed for a BBQ on the lawn of the Wawona Hotel (established in 1876).

It was a good trip and I'm looking forward to getting back there soon to see Tuolumne Meadows and some of the other areas I remember as a kid.