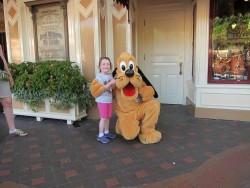 In Late September 2013, Jennifer, Fianna and I made a trip to Southern California to visit Disneyland, Seaworld, the Grandparents, and others. With Julia officially due on December 25th, we would obviously not be making the annual holiday trip or the annual (sort of) international trip, but wanted to do something before being tied down to Fair Oaks for most of the next six months.

We spent two days at Disneyland and CA Adventure Park (which I had never seen) and stayed across the street. On the first day we were joined by Grandma Dianne and Uncle Eric. On the second day Grandma Donna visited the parks with us. In the evenings we also went to Disneytown, which I had also never seen (although I'd been to the one in Florida).

It was the middle of the week, so the parks were not extraordinarily busy. It was also borderline Halloweeen season, so some special decorations were already up and the Haunted House had been switched over to a Jack Skellington Theme. With the moderate crowds, Fianna was able to take photos with and acquire signatures from quite a few Disney characters (Goofy, Minnie, Donald, Sofia, Snow White, Ariel, Aurora, and Cinderella).

After Anaheim we headed down to a very nice waterside hotel in San Diego where we spent a day at SeaWorld, and a day in downtown San Diego. We also had lunch with Uncle Greg, and cousins Donovan and Braden.