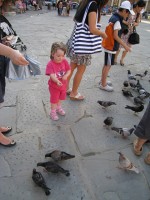 After leaving the Val d’Orcia, we made a short 1.5 hour drive to Siena. Siena is an impressive city. At one time, Siena was in a class along with Florence, Venice, and Genoa, competing for political superiority. Siena’s grand hopes were wiped out, along with a third of the population, during the bubonic plague of the mid-1300’s. Florence’s military conquered them in the 1550’s.

Once in Siena, it took 30 minutes for us to find parking outside the historic center, and another 20 minutes to hike into the hill town to find our lodging. It was a big day, the day before the Palio de Siena, a four centuries old tradition held twice (sometimes thrice) a year. During the Palio, the Piazzo Il Campo (possibly the grandest Piazza in Italy) is covered with a dirt track and bareback horse races are held. Each horse represents one of Sienna’s city wards (Contrade). Every Contrade has their own symbol/flag that is typically worn as a kerchief. It is an impressive gathering!

On the day before the races begin, horses are ‘introduced’, some laps are run, and the Contrades set up their separate headquarters, drink, and sing anthems. You could hear the sound of Contade voices echoing through ancient streets all afternoon and evening. I captured some video of horses and the march of the Contrades as they left the Piazza that day. Here’s someone else’s video of the 2011 race in progress.

In addition to the impressive Piazza Il Campo, Siena has a magnificent Duomo built during its 13th Century heyday. For our one night here, we stayed at the B&B Palazzo Bruchi.

The next day, we set off for a 1.5 hour drive to Volterra.  Volterra is another old hill city. Never a powerhouse of Italian history, but a place of great archaeological interest and long-time human habitation. Volterra was a former Neolithic settlement, an Etruscan center, and a Roman municipium. Trivia... Volterra is also the vampire center of power from the Twilight series, but in the movies all those scenes were filmed in Montepulciano (see Week One).

As a hill city, Volterra again presented us with transportation challenges. While there are not as many tourists, there are something like 150 steep steps up into the city. On our Sienna and Volterra days, we lived out of daypacks because there was no way we were going to carry all our junk AND Fianna up all these hills.

Volterra is very pleasant and relaxing. Most of our time was spent walking, enjoying the views, and letting Fianna play in two of the nice parks they have. One notable historical site in Volterra is the excavated Roman Theatre (1st Century BC).  There are also Etruscan (2nd - 3rd Century BC) walls and gates that are still used to enter the city.

The next morning was a cluster****. After leaving the hotel, we climbed down the city steps only to find the rental had a dead battery. So... back up the steps to find some help... only to find out that it was an Italian holiday. Italians are rather ‘unhurried’ on a normal day... on a holiday... things did not look good. Fortunately, Avis has a certain obligation to NOT leave its customers stranded and we only waited about an hour. If it wasn’t for Avis... we may have stayed another day. Also, the place we stayed in Volterra, Albergo Etruria, was very helpful in dealing with Italian Avis to get us on the road again.

Finally... on to Florence. We stopped in Florence in 2002 and regretted not spending more time here, so we looked forward to seeing a bit more of it.

Florence is a historical Disneyland, not just because of the density of “attractions” but the impressive wall of visitors. Fortunately, a good portion of the central historic city is now restricted to pedestrians.

A visit to the Florence historical center needs planned. In fact, for the Accademia (David / Venetian Paintings) and Uffizi (best collection of Renaissance art anywhere in the Universe), you should make reservations up to a month ahead of time or you will stand outside in the heat & bustle for a very long time.

Taking Fianna into consideration, we approached Florence as a series of walks. A 1-2 hour indoor museum in the morning (before nap) and maybe one shorter indoor site before dinner. The rest of the time was walking, Piazza cafes, a local park, a gelato stop (my favorite), the carousel, and feeding the birds (Fianna’s favorite).

Our hotel, Soggiorno Battistero, was dead center of the historic area and tourist insanity. We literally (after climbing down three sets of concrete stairs) opened our door to the Baptistery and the horse carriages of Piazza San Giovanni. Turn the head slightly to the right... The Duomo. Just about everything the average tourist would want to do was conveniently withiin 15 minute stroller range, and the room still managed to be quiet.

Take a walk south of the Arno River: There are less tourists and more local flavor south of the Arno. Palazzo Pitti and the Palatinate Gardens are here. IMHO, the Church of Santa Maria del Carmine is one of the most underrated sites in Florence. The ceiling is amazing, creating the 3D effect of additional stories leading up into heaven. Beautiful.

The Piazza & Basillica Santa Croce: Per Fianna, the Piazza Santa Croce is the best place to feed pigeons in Florence. It is also relatively quiet compared to the other main Piazzas. The Basilica interior is very impressive (beats hell out of the Duomo) even though the front end is currently all scaffolding.

The Duomo “Terraces of the Cathedral and Dome” Tour: There are at least three ridiculously long and uncomfortable looking lines leading into the Duomo area, one for the Duomo itself, one to climb the Dome, and one to climb the Campanile. Skip them. Go to the Duomo Museum (behind the Duomo) and buy a “Terraces of the Cathedral and Dome” tour ticket. For one ticket you get a set time GUIDED tour of the Duomo, a tour of the Duomo terraces (the ONLY way you will see the terraces and its great views), and, once that’s done, you can head up to the Dome WITHOUT standing in the line. So, one ticket, three attractions, a guide, no lines.

Gusto Leo: Maybe someone would mock me for this... “You go to Italy, surrounded by fine food, and you eat at Gusto Leo for dinner... THREE TIMES IN A ROW!” I don’t know its reputation, but it was relatively inexpensive and we liked the food. More importantly, and you will know this if you have kids, it is hard to find a place where it is comfortable to eat with a toddler... especially when the people around you are probably trying to ‘enjoy the travel experience’ and not your kid. Gusto Leo was one of these places and the staff was very accommodating to us and Fianna.. their web site needs work though.

The key is the striker!

To close things out, Fianna was quite subdued on the ride home. Thanks to the Baer kids, who both had their own iPods to watch movies on, she learned a wonder of technology and used the tablet to watch almost three movies on the way home. She also took two naps.

All in all, a great trip that we’ll remember for some time. Thanks to the Baers for providing the extra nudge required to get us out of Sacramento.