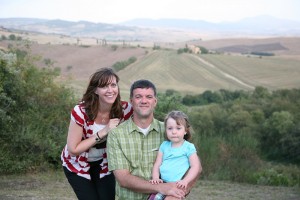 In August, the Bresslers went on our first two week vacation since Fianna was born (Feb. 2009). We used to take 3-4 weeks of vacation a year, so it was nice to get ‘back in the saddle’. Our destination... Tuscany, Italy. We’d been to Italy in 2002 and were looking forward to a return. Italy is a terrific place to vacation. Italians are nice folk with a good deal of respect for family, neighborhood & tradition. There is no shortage of historical sites either, which is a big plus in my book.

The big challenge for this trip was bringing Fianna, who recently entered her ‘terrible twos’ in full force. She has flown often, but we weren’t looking forward to locking her down for a couple of 11 hour plane flights. As expected, the flight to Italy was an exhausting experience, but isn’t every international flight? Unfortunately, at least on the way there, she had no interest in watching movies on the tablet and no interest in taking a nap. An additional test was carting her (40 lbs.), a stroller, an awkward car seat, and the additional luggage around. We managed.

For the first week of our trip, we stayed at Agriturismo Cretaiole, near Pienza, in the Val d’Orcia region of Tuscany. “Agriturismo” is a combination of agriculture and tourism in Italian, a style of vacationing in farm house resorts codified into Italian law in 1985 to financially benefit small farmers. Good for tourists, good for small farmers, and good for Tuscany as it prevented big agricultural interests from taking over the countryside.

The Val d’Orcia region is unique in that the entire region has been set aside as a UNESCO World Heritage Site. Strict development guidelines keep the area as historically authentic as possible.... so, no Best Western Tuscanys with Olympic size swimming pools. In fact, swimming pools are not allowed even for local residents.

At the Agriturismo, we met up with the Baer Family (Robb, Melinda, Jack & Amanda). They were on the 2002 Italy trip, had stayed at Agriturismo Cretaiole before, and recommended we come this year.

While you can simply enjoy Agriturismo Cretaiole and the surrounding area in your own time and way, the family that runs it schedules an entire week of optional activities for visitors (some free, some not).

On our first full day there, we toured the family residence in Pienza to see and sample some of the different products produced on the farm. This was also a good opportunity for the kids to ride a tractor and touch some of the farm animals.

Later that day, Robb, Amanda and I decided to go for a “short walk” to see an abandoned farm house. Although Cretaiole and the farmhouse were visible most of the time, we still managed to get lost and our short walk turned into a 5-6 mile mystery tour of dead ends, gates, and steep hills. We ended up hiking all the way to Pienza before turning around. It was a good walk for me. Unfortunately for Robb, Amanda slept most of the time so he had to cart her 30-some pounds around most of this time.

On day two, we rose for a 6:30 am 3-hour walk covering a lot of the same territory this time with a local guide though. Our guide “Gary” was an expat who had decided to chuck it all and move to Tuscany. He provided us with a lot of information on the Val d’Orcia, like showing us the house where scenes from Gladiator were filmed and how to identify the trail markers that have been posted since the 18th century for rich European tourists.

In the afternoon, we toured the local Icario Vineyard and Winery, had some lunch, and goofed around. In the evening, we visited the Organic Farm Il Casale to see how organic cheese is made, enjoy another opportunity for the kids to see farm animals, and eat dinner.

On day three, Isabella (our Cretaoile hostess) gave us a thorough briefing from Pienza on the Val d’Orcia, what makes it different from any other place in Tuscany, how the area developed through history, how the people live and think there, and some local animosities. After the briefing she took us to the “Romitorio”. Thanks to an oddity of local property law, and the fact that nobody had ever paid it much mind, the Romitoria ended up as private property of Isabella’s family. It was at one time an Etruscan tomb (roughly 700 BC), eventually became a christian chapel/hermitage of some sort, and finally a place where locals hung out and possibly hid from WW2 bombers. There is evidence of much of this activity, but much has been defaced and/or stolen. The family has not been able to persuade any authorities to research/excavate it more thoroughly, although they have themselves been restricted from doing any more of their own digging.

For dinner, we had an outstanding meal at the Monastery of Sant’ Anna in Camprena. In addition to having many frescoes of the 14th and 15th centuries, it was the setting for possibly one of the most boring movies ever made... The English Patient.

On day four, we mostly relaxed and enjoyed the peacefulness of the Val d’Orcia. In the evening, however, we hired a babysitter and a van, and went to the Calici di Stelle (Chalices under the stars) wine festival in Montepulciano to let our hair down, unsupervised by high maintenance toddlers. We drank a lot of wine, watched some guys throw flags around, walked around and enjoyed the sites, and had a terrific dinner in a great old hill town.

On day five, back to wine tasting. For lunch and early afternoon, we visited the Fattoria del Colle in Trequanda. Not just a winery, but a 16th Century villa with it’s own hermitage that is still in the same family hands.

In the evening, Isabella gave an interactive demonstration of how to make the local Pici pasta. Most everyone took part in creating their own Pici which was cooked and added to a humongous evening feast that featured food stuffs from the family farm. Luciano (Carlo’s Dad) & Carlo (Isabella’s husband) were also in attendance.

On our final full day in the Val d’Orcia we toured the Brunella Winery and Wine Cellar in Montalcino. We also had a terrific lunch there with all the kids and Fred. In the late afternoon we listened to Isabella tell us all she knew about Olive Oil (her husband Carlo is a competition taster).

Finally, in the evening, we completed our last day with an impressive wood stove cooked steak dinner at a family diner in Montepulciano.

On the next day we were off for Siena, Voltera and Florence (see Week two).