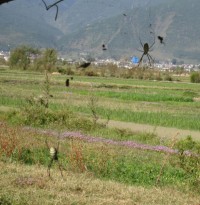 A clean-shaven guy in a Terminex uniform showed up on the doorstep a couple weeks ago. I wasn't expecting anyone so I was my usually charming self, "What do you want?". "I'm here to spray for pests." "OK. Knock yourself out."

Dealing with Terminex is not my thing, as I generally leave all matters requiring actual conversation with strangers, associates, family, and sometimes even friends mostly to Buffy. I just figured this was already arranged. Turns out it was a snafu, and we ended up getting a free spraying, but let me advise... DON'T DO THIS.

Spiders are good... mmmkay. I don't know if he left something out of the mix or what, but no spiders apparently equals SWARMS of flies, at least in Sacramento. Two weeks later and we're doing daily sweeps to get rid of a couple dozen... in the house. I'm guessing we have a mosquito issue too but those guys are sneaky... I saw one in the kitchen though this morning.

Spiders outside... fine. I can live with it. Flies circling my margarita... no thank you, sir. Leave the spiders, leave the webs, bring over the neighbors' spiders... whatever. 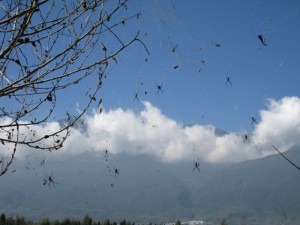