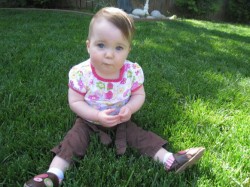 I'm sure you've all missed my monthly updates. :p What can I say... I'm a year old now... I just don't have the time... things to do... places to see... know what I'm saying? I mean, don't get me wrong, being shockingly cute and having a great smile is good and all but it's only going to take me so far. I need to get out there, circulate, make connections, plan my future, so I can take care of all these old folks when they stop bringing home the checks. I mean... seriously... Dad just barely drags his rear out of bed anymore... how much longer can I ride that gravy train?

Anyhow, here's the skinny on what I've been up to... 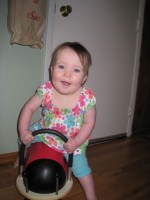 Mom & Dad have had the same gardener keeping this place up for years, and I think the guy's taking advantage of Dad's failing vision (too much time in front of the PC). I don't think the guy is even hitting the whole yard... look at this. Following Mom's lead at work, I'm instituting some QC in the back yard. This place will be ship-shape in no time.

I've heard the stories about Dad's driving when he was in High School & College... The Hornmobile? Doing full speed 360s down Haven Blvd in a Grand Cherokee? How do you think that's going to play when senility starts setting in... maybe 5-10 years from now. Time is my enemy, and I need to be ready to step in when necessary. Already running some drills on my Wheely Bug.

Dad's getting to be a bit of a slacker. Now that he works at home a couple days a week, he sits around in his sweats with bed-head, drinking coffee, and sometimes not even taking a shower until noonish. Come on Dad... you think it's easy having to see that when Mom's trying to get me ready for school... thinking that might be in my future. How would he like it if I started playing that game and he woke up to THIS every morning?

Don't get me wrong, we have our good times. I'm getting real good at copying some of Dad's goofy faces. That guy has something new every week. I think he gets them from watching 'Yo Gabba Gabba' on Nick Jr. every night. He pretends that's MY favorite show so he can change the channel at 7:30, but I'll crawl out of the room for a while and he'll just sit there and keep watching, oblivious to whatever I'm doing.

In addition to my Wheely Bug, I have Dad getting me used to some bike riding. Of course, my assumption was that he knew what he was doing but I may have gotten a little ahead of myself. Here's me waiting to hit the road while he goofs around with his seat. Waiting here!

Most importantly, I'm pulling myself up by my own bootstraps... so to speak. This walking thing is not so tough... as long as I stay near a table, chair or wall. A couple months and I'll be running the show around here.

I went on a big 10-Day trip to Southern California to see Grandma Hatch and Grandma Day while Mom was in Malaysia. Unfortunately since neither Mom or Dad was around I haven't seen any photos yet, so I'll work on that.

Mom, Dad and I also went to the 2010 Scottish Games in Woodland this year, my second year in a row. That's two for two. Pictures of that are here.