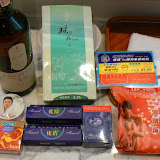 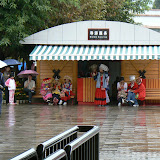 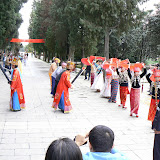 A Parade at the YNV 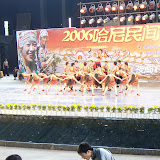 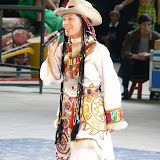 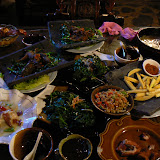 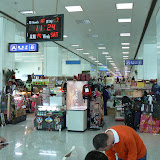 These are some notes from the first day of my latest trip to China. Specifically, these are from Kunming. It seems quite a bit of text for one day, but it has some background info and frivolous stuff that shouldn't pop-up again.

I arrived in Kunming wiped out after 20+ waking-hours in airplanes and airports (Sacramento - San Francisco - Beijing - Kunming). The first challenge was to find someone to write my hotel name and address in Chinese characters so that I could give it to a taxi driver. If you EVER want a taxi driver to take you somewhere in China, you better know how to say it in Chinese or spell it in Chinese characters, because they don't know English and chances are they can't read Pinyin either. Most Chinese hotels that cater to Western tourists have two names, one in English and one in Chinese that may or may not have any relation to the English name. If you make hotel reservations online, the service will often provide the Chinese name in characters for you to print out... do it.

This quest absorbed roughly twenty minutes from the time I made it to the information desk. As mentioned before, rarely are things managed the easy way in China. Another five people became involved with this process and I was marched around between a few other desks before finally convincing one of them to simply call the hotel number, talk to them in Chinese and confirm the correct Chinese name. I considered this option preferable to four airport personnel debating which hotel was which, but I was clearly in the minority.

After making it to the hotel room, I set up the laptop, started catching up with email, got in touch with Wei (who arrived in Kunming earlier in the day) and other friends, poured a glass of Lagavulin Scotch, and tried to relax in the hopes of getting some quality Zs on the first night (wishful thinking). At about 11:00pm, a bloom of spectacular fireworks loudly exploded about 30 feet outside my window... not a small feat since I was 24 stories up. I turned off the lights and prepared for a show, and... nothing. One brief volley of loud and impressive pyrotechnics was all my visit merited.

My problems were only just beginnning... jetlag, worrying about the 'meltdown', and a day of airplane food quickly combined to create some of the worst abdominal pain I've had since my appendix burst. I couldn't lay down a good deal of the time, there was no English programming on the TV, and no laptop. :o I finally got to sleep at around 3:30AM and woke up at 5:30AM with bloodshot eyes, a feeling of impending doom, and a bad attitude.. the typical start to any vacation in China. I can honestly recollect that all three trips here have started out pretty much the same.

Allow me to go off track just for a second to highly recommend a few 'must-bring' items for any Westerner visiting China:

After a hotel breakfast fueled by copious amounts of China's typically outstanding bacon (seriously) and a brisk walk around the neighborhood, I felt a little better. I met up with Wei who's been my online friend for over a year and who I had met for the first time during my 2005 Beijing trip.

Wei was integral to the trip, even though it was not certain whether she'd actually participate or not. Since seeing her last November, her best friend Ivy had moved to Kunming to attend University. We both wanted to see Yunnan, and she wanted to visit Ivy, so we had discussed meeting in Kunming during the October National Holiday and possibly traveling Yunnan for a bit. Unfortunately, her work schedule was unpredictable and up to the day before leaving, it seemed certain that I would be traveling alone for the duration. There was still hope though and as a result I had made no advance reservations other than my first two night's hotel room. As it turned out, she was able to travel with me for a week. A HUGE benefit to me as she spoke the language, had helpful contacts, motivated me to do more than I'd usually do, saved me a lot of money, and is a great friend to travel with.

Wei had very little idea of how to kill a day in the City of Kunming. In fact, Wei didn't want to stay in Kunming at all and preferred to go directly to Lijiang. My interest in Chinese city life just doesn't translate well to a Beijinger. Her's was not a bad idea, but, as anticipated, I was in no shape to leave Kunming immediately. I did have a list of things to do in Kunming and soon headed for the Yunnan Nationalities Villages.

China is not a very ethnically diverse country, with roughly 92% of the population being Han Chinese. However, Yunnan is one of the most diverse provinces, being home to significantly populations of 26 or so other ethnic groups. The Yunnan Nationalities Villages has an area devoted to each of those groups, with native residences reproduced, native crafts & foods available, and the performance of native ceremonies & dances. It's a huge place, and some good exercise, but we didn't manage to see every village. In fact, we made good time just covering perhaps half of the ethnic villages and seeing the 'big show' before closing time. In the pictures, I've listed some information on a few of the Nationalities, which was available from signs in the park, Wikipedia or other sources

The YNV is an interesting place to kill a day, but I found the educational information available to be either too brief or non-existent. I'm not sure if the park is managed centrally or by representatives of the individual Nationalities, but some villages had many placards describing structures and features while some villages had none. I would recommend hiring one of the cute guides in a funny hat as you enter the park. You'd probably learn more and use your time more efficiently... did I mention they were cute?

At least once a day at the YNV there is a long parade where each ethnic group does their thing.. dancing, singing and playing instruments along the main drag. After that they end up in front of a large stage where they do some more. Following that there's yet another production that takes place on the main stage and seems a combination variety show, fashion show, and Yunnan version of "Dance Fever". Each of the group performances on the main stage was carried out by a particular village, but it seemed to me that the routines and music were not authentic to the Nationality but carefully choreographed to accompany recently composed music.

This brings up a point that I think is fairly valid. Chinese government bodies and/or private entities are pretty darn good at manufacturing tourist attractions. It's not a criticism... they have to be. China has an adult population of over one billion people whose incomes have been on the rise for 10-20 years, and, on average, save 30% of their household income. Still, for the vast majority of these folks, traveling outside China is either too expensive or practically prohibited (too expensive and time-consuming a process to acquire a Visa). Creating capacity, and interest, for domestic tourism is a national priority.

Now, I wouldn't say that points of historical interest are "manufactured", but there are certainly historical sites that merited very little attention 20 years ago that are now high profile stops. Also, there is constant rehabilitation going on at these sites as many of them were either horribly neglected or destroyed before the the economic boom. The Cultural Revolution and its Red Guard, in particular, had a pretty good record of doing the best it could to destroy anything that stood out as too old and too meaningful. In many instances, it's hard to discern what's the real McCoy and what's of dubious origin. Sometimes you will actually see this commented on by the folks managing/documenting the site (there will be a good example of this in my Chengdu pictures to come).

Back to Yunnan and the YNV.. The YNV park also brings up an interesting comparison to the United States. What if the United States tried to put on such a show at a similarly themed park? For example, a park with the major California Indian Tribes represented. My guess is that such an enterprise would end in disaster and untold numbers of responsible individuals would have their careers ruined when they're run out of town for being alleged racists.

Still.. The women at the YNV were almost universally HAWT and I think that is what's really important. The pictures I managed to take don't do them justice. If we could duplicate such a place in America, would it really be such a bad thing? I think not.

After sampling some great Yunnan dishes, it was time to depart Kunming and head to Lijiang for a few days. After Lijiang, I'd be headed back to Kunming again for a couple days, and then to Chengdu.

A note on the way out of Kunming... Every Chinese airport is an adventure and each one that I've seen is also huge shopping extravaganza that rivals some Walmarts. From the moment you walk in to the terminal until the moment you board the plane there is no shortage of opportunities to buy snacks, drinks, plants, drugs, herbs, tea, or souvenirs. This particular stand is for use by two domestic departure gates out of perhaps two dozen in the airport. The departure gate itself is less than 50 feet away.