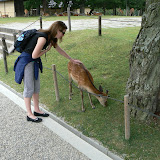 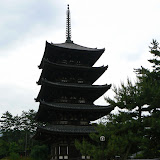 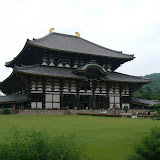 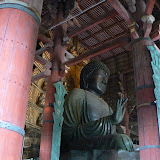 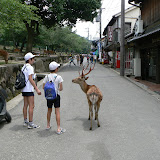 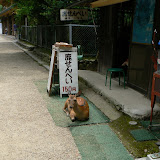 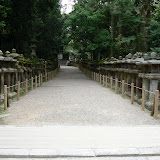 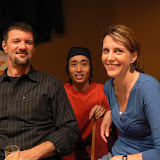 Before Kyoto was the Capitol, there was Nara, which was the Capitol from 710 to 784. The main reason for moving to Kyoto from Nara was to get away from the perceived over-influence of Buddhism on the Imperial court. Although the Capitol moved, Nara remained very influential culturally for many centuries. Today, Nara still contains a huge preserved area that holds the largest number of buildings designated as National Treasures in Japan, and many UNESCO recognized World Heritage sites. Also... it's only a roughly 50 minute train ride from Kyoto.

Nara is full of things to see, but the principle tourist route is a 6KM walk that includes probably a half dozen World Heritage sites. The historical highlight of Nara is probably the Todaiji Temple, said to be the largest wooden building in the world, even though it was rebuilt in 1709 at a size around 30% smaller than the original. Inside the Todaiji is the Daibutsu, the largest Buddha statue in Japan. It's fingers are the size of a man.

Also on the route is the Kasuga Grand Shrine (founded in 768 AD). There are over 3000 lanterns lining the pathways to and corridors inside the shrine. They make for a very interesting ambience surrounded by forest and leading you between smaller shrines. It would be a site to see them all lit up.

The funnest element of Nara is the deer. This particular herd of deer is allowed to roam freely throughout the area. With help from an ancient legend, they have achieved status as 'messengers of the gods'. They fear nothing and do as they please, mingling with tourists, harassing shopkeepers, crossing busy intersections, and so on. There are roughly 1200 of them and while they reproduce fairly fast, they also meet their fair share of casualties by virtue of their freedom and lack of respect for the four tired species they share the roads with. The population stays fairly stable, and there are reportedly 200 pregnant females at this time.

During our walk through the main Nara area we were accompanied by an "English Goodwill Guide" volunteer for Nara YMCA. One of the services they offer is free tours, in English! You only need to call them ahead of time and reserve. I sent them an email two days before, without a specific date, and then called the day before coming to Nara. Yoshie was very knowledgeable and tolerant, considering it was steaming hot and humid. I even offered to make a donation to the YMCA and she refused.

Although most tourists limit themselves to the parkland area in Nara, the whole city is full of ancient temples and structures mixed in among normal residences. Not just temples, but a palace and many old tombs. After saying goodbye to Yoshie, and stopping for an Udon noodle lunch, we visited Gangoji Temple. Gangoji, another world heritage sight, was first moved to the present site in 718, and enlarged in 1244. Gangoji had many wild flowers growing among old graves and buddha totems (proper terminology?). It was a very peaceful stop.

Then it was back on the train and off for Kyoto. Speaking of trains, these are just as spotless as the temples. Littering must be right up there with homicide in Japan because it just doesn't happen. My folks returned from Japan about three weeks before we arrived. In Tokyo, they actually stopped to take a picture of a wrapper in the street... because it was the only litter they saw on the trip.

We had dinner at the same place where we had a snack on the night before (after the flights). It wasn't particularly special food-wise but the guys working there were cool, it wasn't too expensive, and being close to the hotel was a plus since it was raining so much.