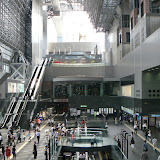 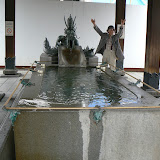 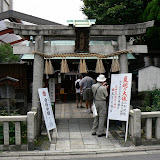 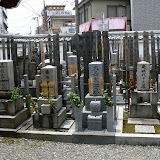 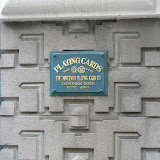 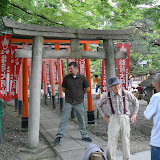 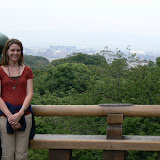 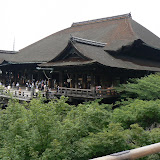 Three planes and a shuttle ride later... Man, it was tough getting plane tickets to come to Kyoto. First off, Kyoto doesn't have an airport. How many cities of 1.5 million people don't have an airport? Anyhow, Osaka has two. So... Sacramento to Los Angeles to Tokyo to Osaka and then a 1+ hour shuttle to Kyoto. Secondly, I couldn't find two roundtrips for less than $2000 a person. That wasn't going to happen. However, I could find two roundtrips and a hotel for $1600 a person. I don't know how that works, but it's good enough for me.

The Hotel Monterey Kyoto is a pretty snazzy hotel too, at least all the public areas. There's even a full reproduction of a Christian Chapel inside for weddings. Apparently, it's all the rage for Japanese to get married in a church, whether they are Christian or not. The rooms were also very nice and very clean, but very small. I think that's just how it goes here.

Kyoto became the Imperial Capitol in 794. It remained the capital until the transfer of the government to Edo (Tokyo) in 1868, at the time of the Imperial Restoration. Some believe that it is still a legal capital and was for a short time known as Saikyo meaning "Western Capital" (Tokyo means "Eastern Capitol"). It was also one major city that was purposely left off the bombing list during World War II, due to it's historical legacy. Thanks to that, the bulk of it's older buildings and historical structures remain intact.

We didn't get out and about until the next day, Wednesday the 17th. For that day, we planned to take the infamous Johnnie Hillwalker walking tour of Kyoto. Johnnie, real name Hajime Hirooka, has been leading tours of Kyoto for 30 years. Three days a week, nine months out of the year, rain or shine, Johnnie meets people near the train station and takes them on a five hour walk from central Kyoto to the Eastern edge of town.

First thing we did though was get there a little early to check out Kyoto's huge and modern JR Train & Bus station. I have no idea how many floors this thing has but there's at least six up and four down, and anything not related to the trains and buses is slammed with shopping and restaurants. The shopping center is called The Cube. After familiarizing ourselves with train routes and such (so we knew what to do the next two days), we went to meet Johnnie.

Johnnie's first stop was Higashi-Honganji Temple. H-H was originally built on orders of shogun Tokugawa leyasu in 1602. The main building here is one of the largest wooden structures in the world. Unfortunately it is undergoing repairs, as it was starting to collapse under its own weight. Currently, it is completely covered by a second building being used to help in the repair process and is closed to the public. There was another hall there being used as a temple in the meantime (Amida Hall).

Johnnie spent a lot of time here describing the main sect of Japanese Buddhism and comparing it to Buddhism in other countries. As you may know, Buddhism started in India but then moved to China and Korea, and then to Japan. Along the way, it was changed rather significantly by each, and affected by other beliefs. Chinese and Japanese Buddhism are much different, as are the temples. Chinese temples always seem to be filled with tons of things & relics and are really obvious, whereas Japanese temples are usually austere and designed to fit in with or enhance natural surroundings. You could walk right by a some Japanese Buddhist Temples and not notice them. Many of them include elaborate gardens and all of them are painfully well kept.

In Japan, the main path of Buddhism is Amidist. Amidists' main concern with Buddhism relates to death and the afterlife. Johnnie would say that Amida (the Buddha they venerate most) does not care about you until you die. Buddhist priests are mostly occupied with conducting services on the anniversary of family deaths. This is often done in the home, and not at a temple, so Japanese Temples are usually pretty quiet places.

However, most Japanese (in Japan) have two religions. They also practice Shintoism, a much older animist religion that recognizes spirits of all sorts as having sway over areas of life. For funerals you'd go to the Buddhist Temple, for weddings & asking favors you'd go to a Shinto Shrine. At least, that was Johnnie's take on it.

After that we walked through several home businesses. Kyoto's special stature is enhanced by holding near monopolies on certain hand crafts, including fans. These items are not made by major factories but by entire neighborhoods of private family residences, each home specializing in a certain part of the process (painting the fan, assembling the fan, making the sticks, whatever). Many families can point to how many generations have been involved in their specific part of the process.

We visited a couple Shinto shrines, but I'll get more into that in Saturday's part of the trip. We saw the biggest cast-iron bell in japan. We saw the original Nintendo Building, used back when all they did was make playing cards. We visited a candy maker and a baker.

We also visited a Buddhist cemetery. Cremation is mandatory in Japan, and I believe that for the most part they use family plots, above ground. The remains are slid into the bottom of fairly simple three level concrete graves. Three elements you will almost always see on the graves are a place to put water, a place to burn incense, and a place to put plants. You will also see wood staves with writing that commemorates the visit of a family member or of an annual ceremony to recognize ancestors.

After Johnnie dropped us off in Eastern Kyoto, we went to Kiyomizu Temple, established in 778. A UNESCO World heritage sight, the Kiyomizu Temple has beautiful grounds and an awesome view of Kyoto city. From here you can get a good perspective of Kyoto's size and how it is surrounded on all three sides by hills. It is one of the must sees in Kyoto, and the walk up is very entertaining, lined with interesting knick-knack stores.

We walked around a bit more after that but we were pretty tuckered out thanks to the 99% humidity (rainy season in Japan). We went back to the hotel, cleaned up and went to dinner at a place close to the Hotel. It wasn't a particularly special place, but the food was decent and the help was friendly.