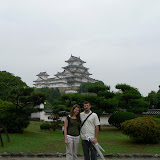 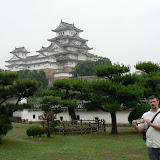 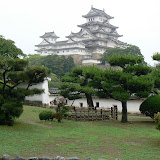 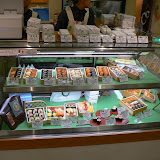 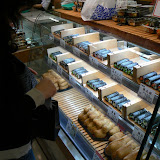 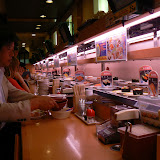 Castle Himeji is arguably the best castle complex in Japan and its most visited. Its current form was complete in 1618. While the city of Himeji was shelled during WW2, the castle itself was left unharmed.

Himeji is a roughly hour and a half train ride from Kyoto. When we left Kyoto the weather was hot and humid as usual but the skies were unthreatening. Everything looked good on the train over... until the last couple miles into Himeji... then it came down in sheets. Fortunately there's a covered walk going all the way from the Himeji JR Train Station, through town, leading right up to the castle gates. The bad stuff died out by the time we arrived at the gates, but it continued to rain off and on. The rain combined with heat, humidity and walking through an un-air-conditioned old castle made for a long sweaty day but well worth it.

One of Himeji's most important defensive elements is a confusing maze of paths leading to the main keep. The gates, baileys, and outer walls of the complex are designed to force an approaching enemies to travel in a spiral pattern around the castle on their way into the keep, facing many dead ends and confusion. This also allowed defenders to fire on them during their entire approach. However, Himeji was never attacked, so this system never faced the test.

There were also three rings of moats in Himeji. Within the first moat was the castle, the ruling district governor and administration officers. Between the first and second were Samurai. Between the second and third were merchants... and beyond that, everyone else.

The castle has been featured in Kurasawa's Ran, the Cruise movie Last Samurai, the Bond movie You Only Live Twice, and the miniseries Shogun. It was fun recognizing locations from Ran.

For lunch we stopped at a Udon noodle place in Himeji. The food was great and not all that expensive. Maybe $6 for a huge bowl of noodles with some meat & vegetables. As a westerner though, you have to take a look at the menu before sitting down at a restaurant in Japan, unless cost is no object. It can be very expensive to eat here, but as long as your patient and look around, it shouldn't cost you more than eating out in the U.S. I would definitely say that you'll find a higher quality meal for the same price.

On returning to the Kyoto JR station we walked through the humongous underground mall with a FRICKIN' HUGE food court. Football fields of good food. I especially liked the 300 feet or so of sushi vendors. Some of the rolls pictured would be $4.50-$6.00 in CA, only $2 here. The food options throughout Kyoto blow most places away.

For dinner, we went to a conveyor-belt style sushi place in Kyoto. The conveyor belt went all through the restaurant with various dishes that you would just pick up. At the end of the night they'd count the dishes to figure your bill. Many dishes (two pieces) were only a dollar. If food of questionable age was not your thing, you could also special order through a fancy electronic menu (seen in the photo). When you special ordered, the chefs would make it immediately and send it out on a special 'speed boat' to your station. I thought this place was great. Buffy didn't care for it. I got into a little trouble trying to use the electric menu. It was completely in Japanese, so I provided some entertainment for the staff when I made my 'best guess' as to what buttons were.