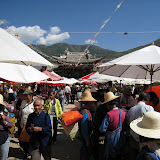 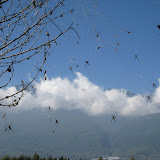 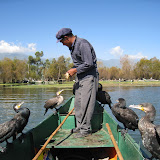 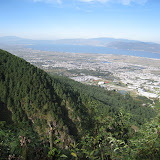 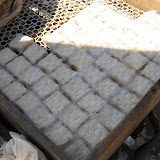 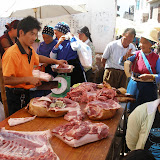 You don't know where that money's been 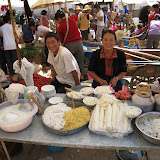 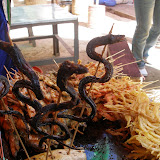 The first couple of days in Dali we frequented a Cafe du Jack. It was comfortable, the food & service was good, and it had a great selection of beers. They also posted some local tours that they vouched for. On the 22nd we tried one of these out, assuming we were hiring a driver to see some local villages.

This began with a trip to a traditional minority residence in a nearby village. The residence had been all decked out to impress tourists, as efficiently as the Chinese know how. This, of course, meant that there were probably 50 people on staff dressed in minority ‘uniforms’ and herding people through as fast as possible. There was a little minority dance show, minority crafts and, naturally, stores to buy mass-produced minority knick-knacks. Not exactly the sort of thing we wanted to see so we cut it as short as possible.

The next stop was on Erhai Lake where some fishermen were doing their thing. We were there for some Cormorant fishing, not something we were looking forward to all that much, but we wanted to keep things simple by not changing the driver’s route. Cody and Gopsdragon had seen some Cormorant fishing last year in Yangshuo.

Fortunately, this was much different than Yangshuo. We dropped into an old rust-bucket of a fishing boat and took a few turns on Erhai Lake to watch a whole crew of Cormorants do their thing… which was to dive down, catch fish, bring them back up to the boat and then spit them out (thanks to a bamboo tie around their neck that kept them from swallowing).

That made us one-for-one on the day, but then the driver inexplicably turned back to Dali. We questioned him but the language barrier kept us from impressing on him that there was a long way to go. By 11am we were back in Dali, venting at the guy who arranged the driver, and getting most of our cash back.

That left us with a late start to salvage the day. We decided to head up Cangshan Mountain by the fastest means possible and then walk back down, or whatever, because we really had no idea what the lay of the land was.

It took roughly an hour and a half to find a chairlift and use it to get up the mountain. Once there, we questioned a merchant in broken English for some directions and decided to walk across the mountain range a bit to another cable car that would take us down to where we could get a taxi back. It was about 2pm and something near 12 kilometers to this cable car that probably closed around five or six.

Fortunately, it really doesn’t take that long to walk 12 kilometers. The views and weather were terrific and the path was level for most of the way. We even took a little side trip further up the mountain to Seven Dragon Maiden Pools, where I almost fell over a small waterfall.

At Seven Dragon Maiden Pools the water channels run randomly downhill depending on the season, making all the rocks very smooth. There are also quite a few places where one needs to hop across the stream. I tried jumping across one spot to another pathway which didn’t look that steep, but once there I was in a jam. I went horizontal immediately but the rocks were too slippery to hold onto, and I was gradually sliding towards a waterfall and into a pool. After failing to get any sort of traction, I made a hail-mary jump back to the other side. Half of me made it, the rest went into the stream… it was enough though to keep me from going over the waterfall.

Also on the path across the mountains, we kept hearing strange noises in the trees. After being convinced it wasn't some huge bird and investigating some more we found guys 50-75 feet up the trees harvesting pine cones. Pine cone nuts are a staple around here, and you can find them for sale in bulk at the markets.

Something to be cautious of around Dali… Our hostel was not in old town but across the street from it. To get to old town you’d walk a block down a new sidewalk, with trees to each side, cross the brand new eight lane highway (that rarely merited more than one lane in either direction)… and there you were… a couple blocks from any of more than a dozen bars and restaurants.

This night, around 10pm, I left the hostel to meet Cody for some drinks. No problem. We returned down the same route about midnight. It’s pretty quiet in Dali between 10pm and midnight, but there is one type of citizen that keeps busy then and that is the BIG FUCKING GREEN AND BLACK STRIPED SPIDERS!!! We’d seen these menaces all over the place but… so far… nowhere near the hostel. Anyhow, sometime between 10pm and midnight one of these terrors spun a web right across our sidewalk and I walked right into it. Holy crap! I had half my clothes off before Cody spotted that thing on the sidewalk. *shudder*

The next day, we did things right and hired a driver through the Jade Emu Hostel. Dave, the Emu manager, went over the details of where we wanted to go with the driver. Our plan was to circumnavigate Lake Erhai and check out as many villages as we could on the way.

This was completely doable but for one obstacle, Ewan, who was possibly my polar opposite. We allowed ourselves to be roped into sharing the costs of the driver with him, and he seemed to agree on the agenda, but I knew there were going to be issues. Ewan was a classic lightweight, 50ish year-old free loading Australian pot-smoking pensioner “musician” who was traveling China to wife-shop, injured himself and had been ‘stuck’ in Dali for weeks. The moment we were setting out he started in... instead of what we agreed on he wanted to go to some hot springs that were two hours out of the way so he could... soak his leg... then he didn't want to walk through villages, he wanted to see nature... then he complained about getting in and out of the van... then he complained about... you name it. Oy! He eventually settled down when he realized we were ignoring him and doing what we wanted anyway.

Over the rest of the day we successfully visited 4-5 villages and watched life go on as it probably always does around Dali with markets, fisherman, farmers and the like. I don’t recall seeing any other westerners once we left Dali proper. Most of the southeastern side of the lake was under construction, and pretty rough driving, but we persevered and made it back to Dali around 7ish.

We ate dinner at the Tibetan Lodge Restaurant on the 23rd.

Tomorrow, off for Xian.