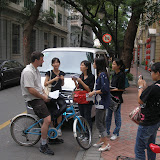 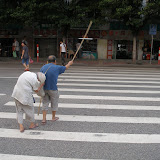 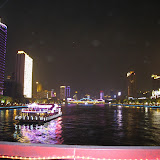 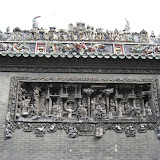 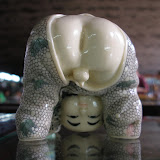 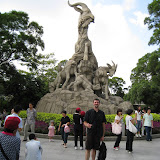 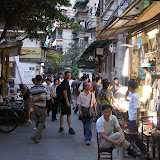 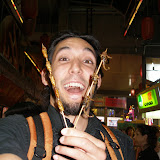 Today we rode bikes like mad all over the Liwan district north of the Pearl River.

First we boarded the ferry for a quick ride to the north side of the Pearl River, along with all the fishermen and such. The ferry dropped us at the fish market from which it was only a short bike ride to Shamian Island. Shamian Island was originally a concession granted to France and the United Kingdom by the Qing Dynasty government in the 19th century. More recently it's become the place to go for Chinese couples to get married and Western couples to seek adoption of Chinese babies, most of whom are orphaned and female. While bicycling we saw many western couples walking babies in strollers along with a Chinese matchmaker. Many places on the island offer stroller rentals. The other interesting thing about Shamian is the mostly old European architecture. It’s a very pleasant place to ride bikes.

Guangzhou is the first city the Chinese designated as open to foreign trade, even before the Opium Wars. There has been a significant foreign presence here longer than anyplace else in China. It’s one of the most western influenced and liberal of big cities in China. They even respect a line here… mostly. At the airport, for example, they don’t mass at every boarding call... they actually line up… a rare phenomenon over here.

After Shamian we biked east along the Pearl River for a bit, then north on Renmin Road to a couple of the huge local parks in the area. Unfortunately, they wouldn’t let us in the parks on bikes but the ride up and back (on the next street over) was very interesting... miles and miles of solid people eating, shopping, working, grabbing the bus, etc… like a humongous ant hill that’s just been kicked. New York City does not even come close.

After 6-8 hours of bike riding in the sweltering Guangzhou weather we returned to the hostel to freshen up before heading out for a night cruise on the Pearl River, with LinJuan and Kelli in tow. Each side of the Pearl River is lined with skyscrapers, apartment buildings and other structures. In the evening, a good many of these are lit up in neon making for an interesting 1.5 hour boat ride. Later, we found an excellent Chinese restaurant that had an air conditioner on the third floor which they gladly placed the waiguoren in front of.

Later that night, Cody and I visited three of the night clubs on Beitan Bar Street (the same street where the hostel was located, right along the river).

The first club had a Philippine Band playing (just like the bar in Hangzhou last year) and at almost every table there patrons were playing dice. As the evening wore on, a few of the guys there started getting pretty hammered, dancing with each other and attempting to drag us into it, so we split before it got out of hand.

The second club had successive live acts on a central stage, including a female duet and a solo male singer. There were roughly a dozen girls working behind a square bar, whose job was not just to serve beers but to play dice with customers.

Using the bathroom there was an interesting experience. As I walked in to the black tiled facilities, a guy was projectile vomiting into the stand-up urinals on one wall. I used the opposite wall to afford him a little privacy. As soon as I started taking care of my business, some guy crept up behind me, slapped a warm towel across the back of my neck and gave me quick chiropractic adjustment... ummm... thanks... I guess. Would have made a good picture.

When it was Cody’s turn, and I was left alone at the bar, another Chinese guy challenged me to a beer chugging contest. Please… you’re kidding, right… needless to say I won. He ended up treating us to beers for the next hour. Displays of drinking prowess (or lack thereof) are fairly common at Chinese dinners and male get-togethers but there is much anecdotal evidence to suggest that they are not as well equipped for it as Westerners.

This bar was a pretty good time, but as the guy who tested my drinking ability became increasingly drunk he also became a little too familiar… as in touching a lot. Before you draw the wrong conclusion, understand that men touching other men are not uncommon in China. You will often see male friends walking down the street with an arm draped around the shoulder, and at clubs they will not let the lack of female representation (sausage-fest) keep them from having a good time. They will form male dance circles, just like the gals in America, and do their thing.

It’s totally NOT gay. Let me offer a few observations, and understand that I’m making a rather broad generalization; 1) Although things are changing a lot in China, especially in the big cities, traditionally, good girls didn’t go to bars and clubs without male accompaniment. 2) There’s 30-40 million more single men in china than women and, with the increased upward mobility, Chinese women these days are not always in a hurry to settle down. 3) Chinese culture places an extremely high value on male friendships and loyalty. In fact, one of the most cherished of Chinese classics (Three Kingdoms) is about three warriors who swear brotherhood with each other, value that relationship greater than even their immediate family, and go on to found a new dynasty. 4) They don’t have the homosexual stereotype pounded into them relentlessly by western religious interests and television shows.

Cultural difference or not, and even though his girlfriend was also there, it’s still a little creepy to this big white guy. A venue change was in order.

The third club had a live singer but was so damn loud we left after the first beer and our ears were ringing like we had just been at an AC/DC concert for two hours.

The idea today was to go into the places we drove by yesterday, but wouldn’t allow bikes, and that we’d taxi from place to place because it was so god-awful steamy.

The first stop was the Ancestral Temple of the Chen Family, or Chen Clan Academy. This is a very well preserved 19th century residence of a wealthy family. Its focus now is to display local crafts like ivory carving, embroidery, sculpture, colored glass & furniture making.

The second stop was the Nanyue Royal Tomb Museum. Nanyue was an ancient kingdom that consisted of parts of the modern Chinese provinces of Guangdong, Guangxi, Yunnan and much of modern northern Vietnam. The kingdom was established by the Han Chinese general Zhao Tuo around 200 BC. Its capitol was Panyu, in today’s Guangzhou. In June 1983, The tomb of Zhao Mo, the second king, was found here along with artifacts, etc, which are on display in the current museum.

After that we went to Yuexie Park to see the Statue of Five Rams, the symbol of Guangzhou. As such, you’d think it would be pretty easy to find... but you’d be wrong. We tramped around the hills for at least an hour following vague signs that allegedly pointed to the Statue but ended up taking us nowhere.

At the top of the hills, after developing a nice sweaty sheen from head to toes, we stumbled into the Guangzhou Municipal Museum which was housed in the Zhenhai Tower, a Ming Dynasty military structure situated at the peak of the old city walls. A great view and decent museum of city history.... but mainly we were hoping to cool off before marching on again. On the way down from the museum we finally found the Five Rams Statue, but didn't really give a damn by that time.

On our way back to the hostel from the Statue, we walked through blocks full of street peddlers selling everything you could think of.

Tomorrow… off to Dali.