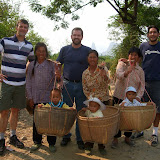 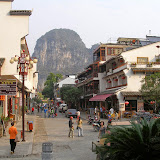 Our street in Yangshuo 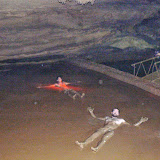 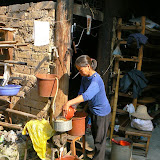 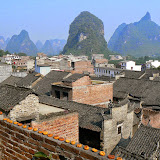 Village with a view 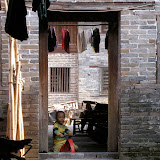 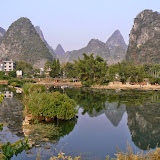 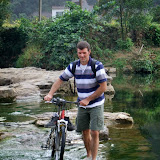 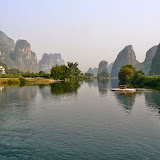 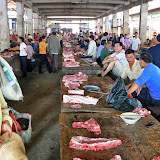 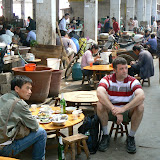 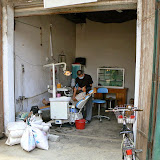 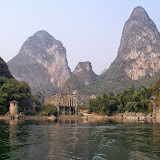 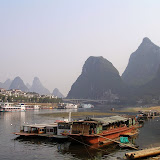 Once arriving at Guilin Airport we still had another 90+ minute ride to Yangshuo. The Guilin area (Jianxi Province) is known for being scenic and relatively free of air pollution (mostly agricultural). Unfortunately we ran into some bad timing as it was smack dab in the middle of the rice harvest and every farmer was burning off leftover straw. This produced a semi-transparent white haze over the whole region. The Sacramento area used to experience this same issue every year, but it's been significantly regulated over the last 10 years.

My initial impression of Yangshuo itself was that it wasn't all that charming, compared to say... Lijiang, but it is practical and convenient. The main street here is called Western Street. Western Street and the adjacent streets form a little tourist mecca with dozens of small stores, hotels, hostels, restaurants and bars. It's a bit more expensive to eat here than what we had been doing so far, but still not much compared to western standards. Especially when 750ml (?) of beer runs you roughly $1.25. Also, you can leave the Western Street area to find the cheap stuff.

Our hotel, the Morning Sun, was impressive. It lists itself as a hostel and I wasn't expecting much for $13 a night. I was surprised to find traditional style architecture, marble floors throughout, newer wood floors in the rooms, BIG rooms, air conditioners in the room, a nice big bathroom whose shower DIDN'T share space with the toilet, no funny smells, big beds, two usable pillows per bed, a balcony, a place to hang clothes, EXCELLENT laundry service, and... TOWEL SERVICE!!! Yeah, towel service... most hostels don't provide towels, and if they do, they sure as hell don't clean them until you leave. Morning Sun gave us fresh towels every day. We had a little confusion settling Cody in as there were no reservations for him in Yangshuo and we were a day early. Due to the unusual circumstances, they offered to plop down another bed for him in the same room. He ended up staying there the whole five nights. For the record... to assuage the folks that think my yearly trip to China is funding anti-satellite weaponry and lead-based pacifiers... the hotel was owned by a Dutch guy. So.. uhh.. half the cost of my trip went to a Canadian airline... much of the rest of it to hotels owned by white guys... check... western civilization destroyed... mission accomplished.

I could tell right away that I had packed way to warmly for this area, which was 80-some degrees and incredibly humid. On the first night I walked less than a block from the hotel to buy two short-sleeve Ralph Lauren Polos, at one of probably a dozen places selling them, for about $8 each. This was nearly my entire wardrobe in Yangshuo. Since anything you wore during the day was going to be a disgusting mess within an hour, I rotated out the two shirts, having one cleaned every day, and hand-washed my pair of REI Slickrock shorts every night... by morning they were completely dry.

The real charm of the Yangshuo area is the natural surroundings and our priority was to head out to the country and the Li River... which we did in big fashion on the first day. We found a local guide (Marcel) that we hired for 150 yuan a day (about $20). Marcel turned out to be a great investment. Not only did he have the Yangshuo area memorized, but he seemed to know everyone in pretty much every village we went to. He also had great tips for things to do and suggestions to save us money. It was more like being shown around by a friend as he seemed to have our interests at heart. Hopefully we didn't offend him too much as navigating the cultural differences between American guys and Chinese guys can be a challenge.

That day, Marcel took us bike riding for roughly eight hours on brutal rock (or worse) paths and directed us to another two hours of climbing around a cave (of which there are many here). This was self-inflicted abuse by the way, as Marcel regularly provided options to shorten our ride, etc. In the cave, Don and Cody also went mud-bathing.

By day's end we were sore, exhausted and the grimiest I've ever been. Mud, sweat and who knows what else...  absolutely gross. Physically we did great though and had a lot of fun until Cody ran into a streak of bad luck during the last 10km run home. First, he caught a flat tire on pretty much the only section of paved road we traveled on and had to take a bus back to Yangshuo. Second, on making it back to Yangshuo he was pick-pocketed for about 700 yuan. Finally, when he told the hotel manager about it, she insisted on calling the police (as if they care about a tourist losing 700 yuan), and they grilled him for 30 minutes on it. Quite the experience for him.

Once recovered, we went to an Aussie expat bar for beers and billiards, which became the norm whenever there was a lull.

One thing the Morning Sun did not have was broadband access, which in my opinion is a real oversight on any hotel's part. It's so simple and cheap to do, why would you not offer it and lose business from those people who need it. I tried to explain this to them... for example, my routine for the five mornings we were there was to wake up early and walk a few doors down to the 7th Heaven which offered free access to customers. I'd go there, do my business, order a couple cups of coffee and breakfast (a higher margin of profit than rooms I'd guess). That's money Morning Sun missed out on. How many breakfasts alone would it take to pay for a wireless access point? Not many. Anyhow...

The day after our bike riding marathon we headed to Xingping village to catch a bamboo boat which took us about an hour down the river to see scenery which is so famous that it's used on the currency. On the way down river, we ran into quite a few folks doing their usual bit, harvesting whatever is growing at the bottom of the river, fishing, crabbing, washing clothes, taking the water buffalo for a walk, etc.

After that we caught a bus to the market in Fuli. Fuli seems to be a central location for farmers and all sorts of merchants to bring their goods and ply their wares, including dentists. There are some interesting pictures from the Fuli market in the gallery. There was also a 'restaurant row' ... so to speak, and we stopped there for lunch. From Fuli, we caught another boat back into Yangshuo where we hung out for the late afternoon.

One tourist attraction they have in Yangshuo is some fancy schmancy light show that's supposed to be pretty good. It's right next to the river and we passed the stage on the way back to Yangshuo on the boat. Only problem is that it costs something like 120 yuan. Chump change right? Surely it is, but after a couple weeks in China you start being very protective of that yuan. You start enjoying bargaining on everything and start treating that stuff like it's dollars. 120 yuan!!! You gotta be kidding me?

Marcel suggested we hike down to the other side of the river at night and watch it for free. The sounded like a reasonably shady adventure that could go all kinds of China bad, so naturally we went for it. We talked little Lin Juan from the hotel into going with us too, but I'll talk about her later.

By the light of the moon we hiked maybe a mile and a half down old streets and climbed down the river bank to finally find seats on the rocks across the river from the stage. Apparently a good deal of the 'entertainers' were hidden over here too as we could barely make out a few dozen bamboo boats and hear a bunch of them chatting. There were also some folks about 20 feet above us, on the edge of a village by the river bank. After a few minutes, some guy appeared out of the dark and started chatting with Marcel in Chinese. After a bit of that Marcel starts doing the half laugh... THE LAUGH... you know something's up when a chinese guy does the half laugh... it's like a western guy saying 'uh oh'. Trust me... it's not a reaction to humor.

Now, we didn't know if we were looking at trouble or what, and Marcel's not talking... typical... better to not say anything than to create a potentially face losing scenario. The guy comes down a second time and finally we're able to drag it out of Lin Juan that he's looking for a little scratch... predictable. Apparently, the village above claimed dominion over that section of the river bank and was responsible for keeping it clean and whatnot. According to them, anyone who wanted to watch the show here had to hit them up with 10 yuan and come up to sit on their partially destroyed cement balcony. Fine... whatever... the view was actually a little better there, and they had little chairs for us, but they didn't have any beer or ice cream. :/ ... opportuntiy for profit missed on their part.

The show itself took place mostly on the water, involving several dozen bamboo boats sometimes forming themselves into temporary platforms to aid whatever scene is playing out. There were bright lights reflecting dramatically off the local landscape, and the usual nod to whatever ethnic group is prominent in the area. Good stuff, but I'm sure it looked much better from the good seats. :p