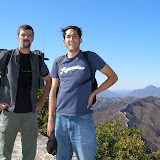 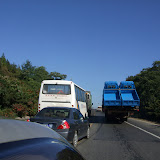 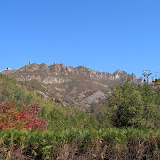 Simatai section of the Great Wall 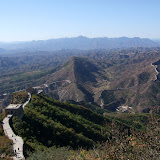 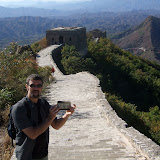 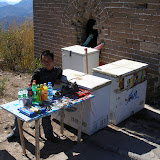 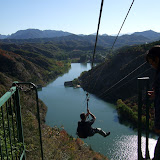 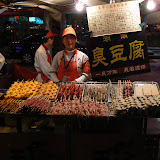 The next day we didn't make use of Alex, but Wei offered to take us to the next destination, the Simatai section of the Great Wall. It took a two hour bus and another hour in a cramped taxi (normal) to arrive there (taxi ride roughly 65km, cost of taxi 100 yuan or about $14). On the way we had some great exposure to China highway traffic at it's best. It's no surprise to see four or five lanes of traffic on a two lane highway in China. In fact, there's a fairly good chance that the traffic coming the other way will be coming right down the middle as trucks and what have you will try passing on the far left if they can't return into the right lane before colliding.

The Simatai section of the Wall is much less visited than the more famous Badaling and Mutianyu sections, which are swarmed by tourists and vendors. One reason may be because it's more exercise than the average tourist is interested in. There's a steep climb if you want to start at the top and walk down, otherwise plan on climbing a few thousand irregular steps that are almost as steep as the mountainside. Looks like they picked the hardest place for an army to cross, and to build a wall, and slapped one down anyway. We went almost straight up the mountain to the farthest tower you see in the photos, and then walked all the way down to the river. A cable car will take you part of the way up, but not that far.

On the other hand, the views are much better at Simatai and it's in a more original condition. Some sections you have to skirt around as they're not safe enough to use.

One annoying thing about Simatai is traveling vendors. There are scores old ladies with pouches full of goods that will follow you all the way up the hill, pretend to be concerned if you make a misstep, remind you that they have water for sale, etc. You'll be huffing, puffing, and dripping sweat... turn around... and there will be this old lady standing quietly.. and unwinded... about three feet away from you. Grrrr. Still, it's not as bad as the circus the other sections have become.

The views at Simatai are awesome and it seems you can see the Wall for dozens of miles as it disappears into another distant mountain range... and... of course... there's ice cream at the top which always prompted a grin.

When I was younger, I used to go on hikes with my Dad and he would always say that there was an 'ice cream man at the top'. There never was, and eventually you just new it was a lie and laughed it off. Well... in China... there IS almost always an ice cream man at the top, even better... he has beer. If you're looking through the photos you'll see many of these critical facilities.

Once we made it to the top, we walked all the way down the Wall to a valley with a river, where we used a zip-line to cross over to the entrance area.

Unfortunately, the Great Wall ice cream man was serving some bad cream today. By the time I made it to the river my stomach was starting to feel a little creepy. On the taxi back, I made the driver pull over so I could forcefully deliver up some street pizza. I figured it was better to do it now than on the two hour public bus where I'm sure the Chinese would find my condition infinitely amusing.

The rest of the night I was weak with something like the chills, but not horribly bad. I still managed to head out with the group to Wangfujing Street, Beijing's major pedestrian mall. Right off of Wangfujing Street is a huge food court that sells some outrageous fare... on a stick. Centipedes, starfish, silkworms, grasshoppers, scorpions, snake, squid, you name it... all prepared with the utmost care... yeah, right. I ate at McDonalds. Just needed something fairly trustworthy to put me back on track.

After that, I headed in for another early night in Beijing. What a pussy! Cody and GOPS both went out until the wee hours, but took different paths. Again, that's their story, if you can drag it out of them. ;)

The next morning we went for a quick walk around Houhai Lake in search of breakfast and finding some awesome dumplings, but not having a lot of time to enjoy them. Some of the lakeside parks had folks doing the usual stuff, Ping Pong, morning exercise, cards, mahjong, etc. Then a taxi to the airport, a 1.5 hour flight to Taiyuan, and a 1.5 hour taxi to the ancient city of Ping Yao.