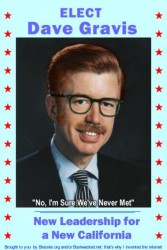 On Monday, June 14th, I appeared before the Small Claims Court of Los Angeles County to defend myself, and Bressler.org, in a lawsuit charging theft of intellectual property. The charge stemmed from our 2003 CA Recall Photoshop Thread and the publication on this website of Peckable’s “Dave Gravis” parody. I learned on Saturday that the case has been dismissed, with prejudice. We won! Freedom of speech is alive and well in the People’s Republic of California.

I’ve kept this a secret since the whole thing started. Peckable knew enough (maybe why he hasn’t been around much lately) and Barb101 knew a little. I didn’t want to scare anyone from participating and felt pretty confident that I’d win eventually (didn’t want to jinx myself either). It has been a long and nerve-wracking process, and one in which I believe the court made it even more difficult.

It all started after a few emails between me and an LA Times Reporter led to their publication of the parody right before the recall election. About a month afterward, Gray Davis’s photographer sent me a bill for $1000 for use of the original Davis photograph that Peckable altered. Naturally, I had no intention of paying, but wanted to extend the courtesy of a reply to explain why. This was against the advice of many, including Drew Curtis of Fark. Drew indicated that he receives multiple claims of this sort every week, and learned from experience that it wasn’t worth the bother.

Regardless, I asked a friend if he knew a lawyer who’d ‘make it official’ so to speak... review my position for accuracy and draft something on his letterhead in reply.

The photographer then called me at home and threatened to pursue it further, asking if I would care to settle the matter for a cash payment (a frequent theme with him). He said the LA Times had already settled with him for $250, and recommended I do the same. I declined. He filed suit against me in Los Angeles County Small Claims Court for $3000.

I don’t want to make this story too long, but in brief let me say that I was NEVER legally served in this case. As a result, I didn’t attend the initial hearing which took place while I was in China. Even though I contacted the court before leaving to verify that I didn’t need to attend, somehow a $1500 “default” judgment was entered against me (plus $50+ in expenses).

On my return, I filed a motion to vacate the default judgment and change venue of the case to Sacramento County. Again, the court’s advice was that I would not have to appear just to argue for these motions (on a case where I’d never been served). They were wrong.

After a hearing date was set, the photographer called once again, mentioning how inconvenient it would be for me to come down to LA and how I was going to lose on both motions. Again, he offered to settle, this time for the original $1000 that he billed me for. It seemed telling to me that someone with a default $1500 judgment would be trying to bargain down to keep me from defending myself.

I went to LA County on June 14th intending to argue for my two motions. The judge indicated that she was going to vacate the judgment, but was NOT inclined to change venue. However, in lieu of me having to come down to LA a second time she was willing to hear the case then, if I wanted to. I said that I did not have all the materials that I expected to use in my defense, but I thought it was a pretty clear cut issue and was willing to ‘go for it’.

The photographer’s case was an interesting one. To hear him tell it, Peckable’s parody was primarily responsible for Gray Davis’s recall, and hence, destroying the value of his photograph. Yes friends… Bressler.org brought down the Governor of California with a single Photoshop. Fear the power of the internet.

For my part, I defended the free use of the parody based on Section 107 of the Copyright Law of the United States of America, which states:

.§ 107. Limitations on exclusive rights: Fair use

Notwithstanding the provisions of sections 106 and 106A, the fair use of a copyrighted work, including such use by reproduction in copies or phonorecords or by any other means specified by that section, for purposes such as criticism, comment, news reporting, teaching (including multiple copies for classroom use), scholarship, or research, is not an infringement of copyright. In determining whether the use made of a work in any particular case is a fair use the factors to be considered shall include —

The fact that a work is unpublished shall not itself bar a finding of fair use if such finding is made upon consideration of all the above factors.

The judge showed a great deal of interest in how the photographer had concocted his dollar amounts. The original $1000 was his “day rate”, how much it would cost to hire him for the day. How did he come up with the $3000? “I tripled it”. The judge didn’t seem too impressed with his methodology, especially when I pointed out, and he couldn’t deny, that he had received an email from the LA Times indicating that their usual rate for a picture the size of the parody was $50-$75.

In my arguments, I expanded on each of the four factors listed in Section 107. (1) It was never intended to make make any profit for myself or the creator, and never had. (2) The nature of the original photograph was not unique - a basic headshot, was virtually public domain, and I challenged the court to find anyplace online where the original photo was credited to the photographer... I could find dozens of places, and several parodies where it wasn't. (3) The parody was substantially different in appearance and intent from the photograph. (4) The parody couldn't possibly have any effect on the market value of the original photo and couldn't possibly have cost Davis his job.

I was still rambling on when the judge had apparently heard enough. With a half-smile she noted that I had already “done a good job” of presenting the Fair Use provision of US Copyright Law and she would need time to consider judgment. Basically, shut-up and quit while you’re ahead (or maybe she noticed my bulge).

I left her with this attachment.

The final judgment: “After submission, court rules as follows: Plaintiff’s claim is dismissed with prejudice. Defendant’s use on his website of an altered version of plaintiff’s copyrighted photo of Governor Davis was political parody and constituted “Fair Use” rather than infringement under Section 107 of the Copyright Act.”

Oh, and in case you're curious, before the case I did acquire a registered copyright on Peckable’s Photoshop, with his permission. I was hoping to get a chance to craftily employ it during the trial (e.g., “Does the court consider the U.S. Copyright office an impartial guide as to whether a derivative work meets the fair use provisions? BAM!”), but the Come to Jesus moment never happened. However, if anyone plans on making t-shirts with this now worthless Photoshop… better see me first. ;)

I think I'll be having a professional printing done, sign it “Thanks for the memories – JB” and send it to the photographer. :D