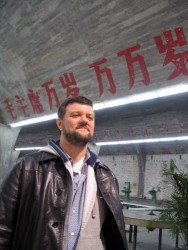 Kind of a weak batch of photos, compared to the '04 China trip. Unfortunately, a lot of the best stuff I did I never took pictures of... they just seemed like real inappropriate places to break out a camera, like some urban commando tourist. For example, walking through a four foot wide hutong alley surround by Chinese and probably being the only white guy to come through there so far this year. Meh... just keep walking... for the love of God, don't slow down!

LATE EDIT: There's a lot of text in the description field of many of the photos. For the 2005 and 2004 trips, this was my process instead of writing the daily journal entires that I do now (which are much simpler, easier to maintain, and much more likely to be read).

Below are some old posts that I decided to consolidate here as a result of the latest and greatest website migration.

I took a trip to the The Military Museum of The Chinese People's Revolution today. On display is probably every freaking mortar, machine gun, submachine gun, pistol, tank, etc., of every national make, previous to 1950. There was also a good deal of aircraft, including the remains of two crashed U.S. Spy planes.

Also, there was a detailed military history of China, per the Communist Party (75% of that being after the advent of Mao of course). There were asolutely mind-boggling casualty counts for almost every major 'struggle'.

Most of the museum was in Chinese, but there was some high-platitude commie 'Engrish' to go around too. 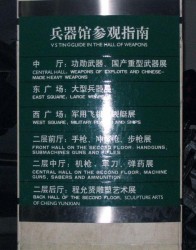 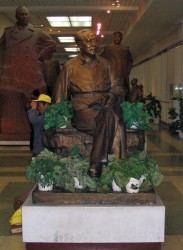 A Beautiful Day In The Neighborhood

Most of the week the weather has been pretty good, but cold. Today, I get a look at the famous Beijing polution. 36 degrees and "smoke" according to weather.com. This is looking out my hotel room. A good dust storm from the north would make this perfect.

The other picture, is a Hutong right below my hotel room... not the one with the pizza. 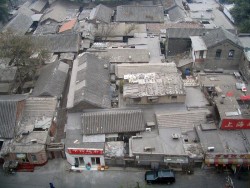 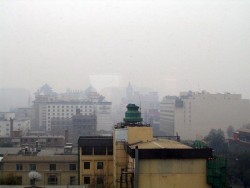 The Mao Mausolem... where they allegedly keep his well preserved remains on display. However, just about any Chinese will say it's fake and the real Mao is kept underground. I didn't hazard the hour long wait to get a look, plus all you get is a 2-3 second peek to review the quality of the waxwork.

I'm sure the other pic will inspire some predictable comments... Regardless, it's me and Erica, my best friend in China. We've been 'pen pals' for about a year and a half. She's working on becoming a tour guide eventually, but now works in this store selling Mongolian crafts (seven days a week, 12-hours a day) to pay the bills. She's also a Muslim, which I don't believe is all that common in Beijing. I'm wearing all the jackets because it's fekking freezing outside. 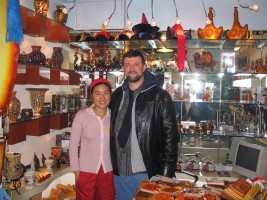 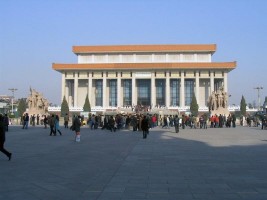 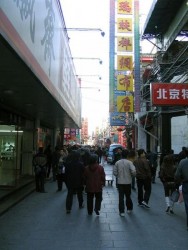